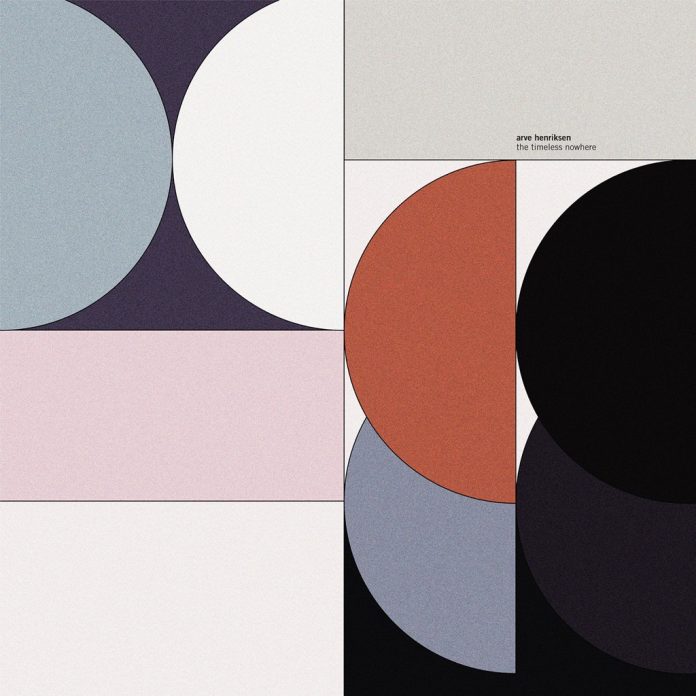 The LP and bar code numbers given below reference the four LPs and two compact discs which together constitute the full package of this limited edition rune grammofon release from Norwegian trumpeter, falsetto vocalist and “soundscape sculptor” Henriksen. Having only the two compact discs to refer to here, I’m unsure as to whether or not the LPs add anything beyond further original art work from rune grammofon’s Kim Hiorthøy, but I suspect not.

The overall title – The Timeless Nowhere – merits a review in itself, but to concentrate on the music: here are 42 tracks, running for nigh-on 160 minutes, of largely rubato meditation and seamless electro-acoustic sonic patching and melding, conjuring the sort of ambient soundscapes that will be familiar to long-time Henriksen enthusiasts while still subtly distinctive and fresh. The music is a matter of neither compilation nor reissue, rather a web of traces and echoes as reconfigured as they are revitalised, and with a sizeable portion of previously unreleased material in the mix.

Consider the initial experience here, Towards Language: Live At Punkt. This features Henriksen with long-time collaborators Aarset, Bang and Honoré: Henriksen connoisseurs tell me the music is a live reworking of the 2016 album Towards Language. Three tracks, Groundswell, (the free-ish) Turf War, and Vivification supply refreshing evidence of the sort of organic command of linear momentum, vibrant dynamics and incisive thematic exposition which underpins the more radically abstracted aspects of Henriksen’s poetics.

Acousmograph features some variously transmuted field recordings as well as – in tracks like Chamber Calibration and Point Of Departure – indicative traces of the lengthy shadow cast by Miles Davis. But the chief point to note here is the indisputable originality of Henriksen’s overall approach, his extraordinary command of plaintive tone and painterly texture, set in the most patient, largely tender service of root matters of loss and longing, threnody and threshold (I’m told that the album Captured Under Mountainsides is dedicated to the memory of the trumpeter’s brother, Kjell Ove Henriksen).

Now in his early 50s, Henriksen can lay claim to a most distinctive discography, including such memorable releases as Chiaroscuro, Cartography, Places Of Worship and Atmospheres (the last with Tigran Hamasyan, Eivind Aarset and Jan Bang). The Timeless Nowhere is an essential extension of all such work.

Gordon Jack - 21 January 2019
Along with Charles Mingus, Thelonious Monk and Horace Silver, the prolific Benny Golson created some of the most memorable compositions in the jazz repertoire. This reissue features his first albums...