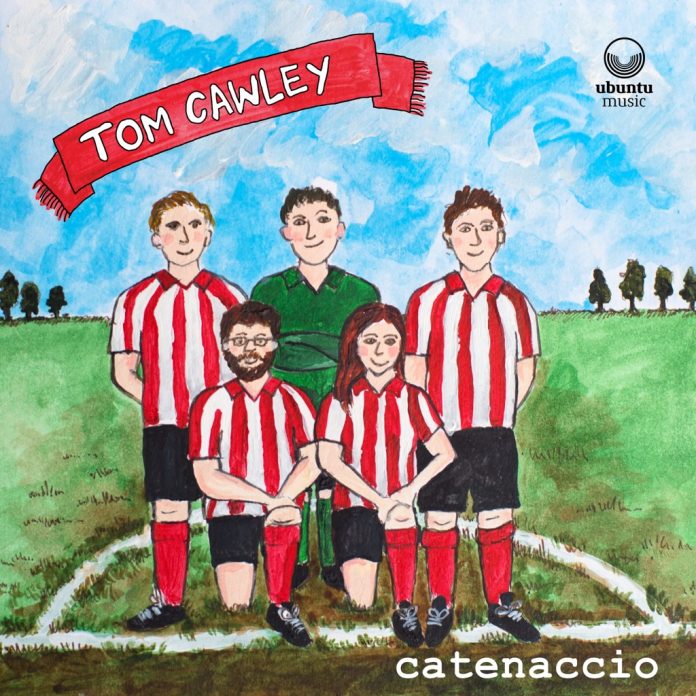 Pianist Tom Cawley has an wide range of credits to his name, from touring with Peter Gabriel to winning the Best Band award in 2008 at the BBC Jazz Awards and teaching jazz piano at the Royal Academy of Music.

His latest album draws upon his interest in synthesizers, as well as a love for football. Catenaccio refers to an Italian football style introduced in the 1960s, emphasising movement and flexibility, which exemplify the style of this album.

The opening track, The Ungainlies, blends fantastic synths with a melodic bass line and vocals, reminiscent of the early Return To Forever albums. The second track, Jabulani, is named after the controversial football that was introduced in the 2010 World Cup, which was said to be unpredictable by goalkeepers. The song is a strong driving piece, which opens up for some excellent unison from the vocals and flute.

Football references are used to name all the tracks on the album, such as Nutmeg, Row Z and Rabona. The latter is a football trick of Spanish and Brazilian origin, which is reflected in the song’s Latin feel in the rhythm section. Another highlight is Left Peg, which opens with a more modern synth sound than the other pieces, progressing with a slow and simple melody which builds with great energy as the musicians begin to improvise around the modulating chord sequence.

Catenaccio is incredibly fresh, and anyone interested in both the classic and contemporary will enjoy this album as it mixes both expertly. The musicianship is fantastic and the result is a wholly original and captivating recording. That apart, I’m not sure there has been a football-themed jazz album before, which is reason alone to check it out.

Mark Gilbert - 16 November 2020
In mood, style, sound and instrumentation (but see Henderson below) the Zawinul Syndicate sounded a lot like an extension of Weather Report. The “ethnic” and funk grooves are there...