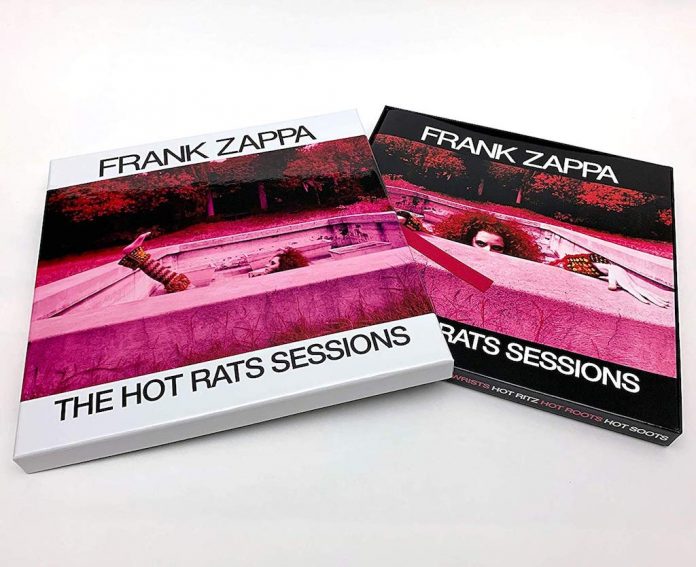 Frank Zappa’s Hots Rats, released in 1969, was arguably one of the most important records in the history of popular music. In his book Zappa And Jazz (Matador, 2015) Geoff Wills wrote that “Zappa created a new dimension in his music”. This was surely an understatement. Certainly it changed a lot of fans lives, this writer included. For a start it opened up a whole world of jazz to rock fans and introduced a paradigm shift in multi-track recording that, at that time, easily surpassed the Beatles’ Sgt Pepper (Parlophone, 1967) in technological terms. Hot Rats was one of the first albums to utilise a prototype 16-track tape machine.

But crucially, Zappa was canny enough to know how to get exactly what he wanted out of the technology and the musicians. It was also one of the first jazz-rock albums (if not the first) ever released, instigated by a rock musician rather than a jazz musician. This was technically Zappa’s second solo album, his first being Lumpy Gravy (Capitol, 1967/8) written for a large ensemble.

This box set of archival outtakes and backing tracks (but surely much more than that!) forensically discloses the painstaking route to the final construction of the album. Peaches En Regalia is broken down in various takes to unveil how it was recorded in sections and how the tracks were slowly overlaid to become the masterpiece that it became.

Other tracks not directly associated with Hot Rats are included to show how the genesis of the album emerged. A double-length version of Richard Wayne Penniman’s blues Directly From The Heart To You, subsequently released on Weasels Ripped My Flesh (Bizarre/Reprise, 1970) showcases Don “Sugarcane” Harris on electric violin who Zappa had employed on Hot Rats to great effect, along with fellow violinist Jean-Luc Ponty who appeared on It Must Be A Camel.

However, the only other member of The Mothers Of Invention, other than Zappa himself, to appear on the album was the talented multi-instrumentalist Ian Underwood who supplied the piano, organ and all woodwind and sax parts. Zappa also hired jazz bassist Max Bennett, and some session drummers including John Guerin and Shuggie Otis played some remarkably lithe bass on Peaches. Zappa’s old mate Captain Beefheart sang an essential vocal track to Willie The Pimp thus immortalising him in the annals of rock music.

Much of the music on this box set arose out of jams but, judiciously edited, they emerged as some of the most pivotal elements of these six memorable tracks. The anodyne titles of Transition and Another Waltz belie the fact that they provide perfect examples of this jamming for gold. Transition later appeared on Zappa’s third solo album Chunga’s Revenge (Bizarre/Reprise, 1970) as Twenty Small Cigars whilst an edited version of Another Waltz was to be found on Burnt Weeny Sandwich (Bizarre/Reprise, 1970) as Little House I Used To Live In.

It should be noted that since Zappa himself could not have had any influence on the contents of this box set, he would no doubt have approved of the inclusion of his 1987 digital remixes of the record, rather than the original 1969 analogue version; he clearly favoured the former. This was a case of the artist improving – in his view – his masterwork. The most obvious departure from the original version was the few minutes of warm-up on The Gumbo Variations which adds another four minutes onto the ’69 track. But Zappa aficionados can easily detect the other subtle and sometimes not so subtle changes made throughout the album.

Whether this handsome box set quite merits its high price (around £100) is questionable. Was a Zappa board game, accompanied by plectra as place markers, really necessary? That said, the six CDs plus accompanying LP-sized booklet with copious sleeve notes, tributes and rare photographs, are unequivocally excellent as is the hilarious alternate photograph of The GTOs’ Miss Christine on the box cover. Whether Zappa would have desired this trawl through his studio vaults cannot be known, but a more fitting 50th anniversary tribute to his magnum opus would be hard to imagine.

Andy Hamilton - 11 August 2019
I recall listening to Stephen Micus on ECM many years ago, and dismissing his work as vapid New Age. Maybe I've mellowed, or maybe he's got better, but I...