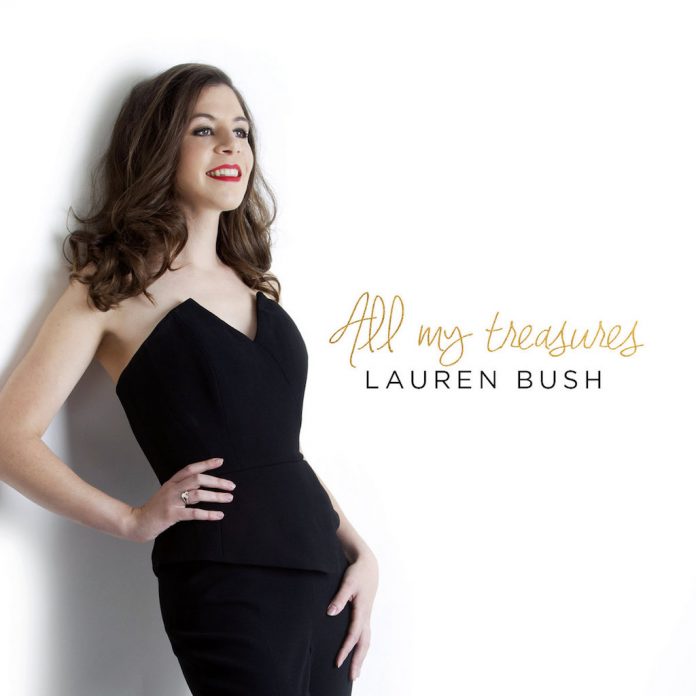 Unplayed, All My Treasures had already met the first of my criteria – good-to-great material. In fact it boasts a songstack to stimulate and breathe new life into all but the most jaded palate. So, material, check. The finest material in the world is as nought if the performer can’t perform and the musicians can’t blow. So, again: performer, check; musicians, check and double check.

This leaves me free to get to the main event. The opener is a signature song of Bob Dorough, a quirky writer and performer albeit compared to Earl Okin he’s as bland as Donald Peers. Dorough is not everyone’s cup of tea including mine but my great friends Marlene and Billy VerPlanck were both fans and friends and around 20 years ago when I was a guest in their home in New Jersey they insisted on driving me 90 miles each way to see and hear Dorough peforming in a Roadhouse in Pennsylvania and he laid I’ve Got Just About Everything on the audience. Lauren is one of a handful of performers who can perform Dorough and not suffer in comparison and it gets the album off to a flying start. She’s a performer who likes to give the musicians plenty of room and Liam Dunachie’s piano enhances the vocal.

Jerry Kern and Johnny Mercer each wrote with many collaborators but only worked together once and as if somehow aware that this was their one bite at the cherry they contrived to come up with a durable score for the Fred Astaire-Rita Hayworth movie You Were Never Lovelier, so much so that three of the numbers – the title song, Dearly Beloved and I’m Old Fashioned (performed by Rita Hayworth albeit dubbed by Nan Wynn) – are still being performed and recorded today, witness this recording, a little too up-tempo for my taste and Brandon Allen’s booting tenor is not really at home on a ballad but hey ho.

Dindi is, of course, one of Jobim’s finest and benefits from some fine trombone work from Kieran McCloud and although Lauren turns in a fine reading it tends to feel out of place and unbalance the album although I can’t fault Lauren for wanting to illustrate her versatility. Secret Love is taken at a fair clip which is about all you can do with it and Lauren weighs in with some scat before standing aside for David Ingamells’ drums to tease Brandon’s tenor.

In 1948 not everything was aimed at Broadway or Hollywood: there was still a healthy market for the one-off shellac 78 designed strictly for the juke-box and although Perry Como and The Fontane Sisters and Jo Stafford and Gordon McCrae both charted with A You’re Adorable no one expected it to outlast its natural shelf life of 12 to 16 weeks, least of all writers Buddy Kaye, Sydney Lippman and Fred Wise, but The Alphabet Song (as it came to be known) was a natural for the children’s TV market or, as Variety had it, kid-vid, then in its infancy (sorry about that). That’s where where Lauren heard it, and included it here as a nod to nostalgia.

At exactly the halfway point – what would be the last track on side #1 of a vinyl album – comes a track worth the price of admission on its own. I’m Gonna Sit Right Down And Write Myself A Letter is the kind of number that used to personify albums such as this; a natural swinger that encourages, nay, urges singer and musos to blend seamlessly and blow up a storm, which is precisely what happens after Lauren kicks things off with the rarely heard verse. The Herb Ellis, John Frigo, Lou Carter slow swinger isn’t done as often as it should be and gets a fine reading here from all concerned. Charade is the second Johnny Mercer lyric on the album and is interpreted like the gorgeous number it is. Sweet Georgia Brown is right behind I’m Gonna Sit Right Down in tempo, warbling and blowing whilst Doodlin’ sets us up nicely for what is the standout track by a country mile. In 1940 Hollywood brought the 1938 Rodgers and Hart show Too Many Girls to the screen and Dick and Larry wrote a new ballad, You’re Nearer, for the occasion. It’s a lovely ballad and Lauren extracts all the plaintiveness that Larry inserted.

As a student of irony I relish the fact that an album where everything reeks of class is self-produced whilst albums inferior in every department have little or no trouble finding labels. There is one final track, Feelin’ Alrights and it is a massive understatement of how you, the listener, will be feeling when you get this far.

Derek Ansell - 15 December 2019
Reverie is a good title for this release as it is a fairly low key set of ballads and slow to medium pieces that float along amiably without generating...

Till Brönner and Bob James: On Vacation