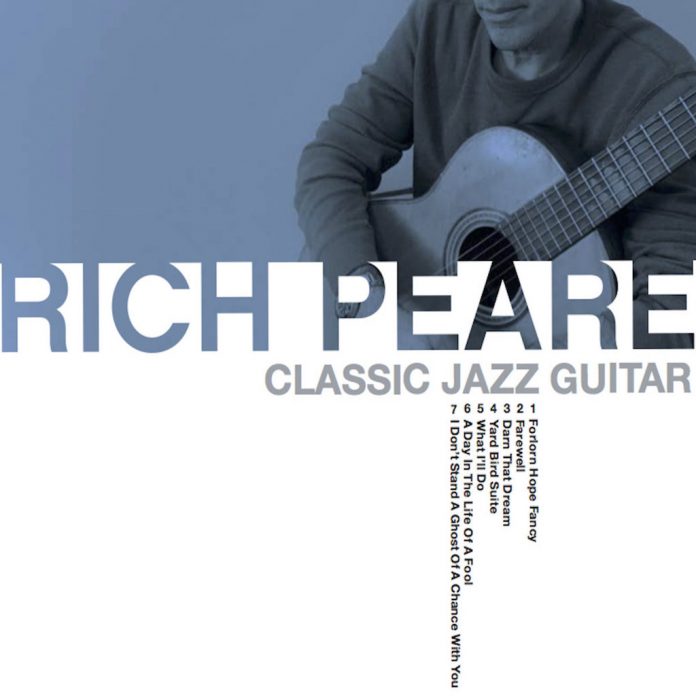 Rich Peare began as a classical guitar student, who made his New York debut at Cami Hall in 1985. In his 20s he got turned on to jazz, and studied with Tristanoite Peter Prisco, a student of Sal Mosca. He now considers himself a jazz musician, though he still plays the classical repertoire – hence this album, his third, which offers a further perspective on the complex relationship between jazz and classical.

His first album Guitar Hour was solo, followed up by a duo with veteran bassist Bill Crow, Sunday Session. In 2016, he made the present recording in his teaching studio on Staten Island, New York, playing his Tom Humphrey classical guitar.

He begins with two pieces by Renaissance English composer John Dowland, Forlorn Hope Fancy, and Farewell. Then come some jazz standards. There’s a Latin interpretation of Charlie Parker’s Yard Bird Suite, and a samba, A Day In The Life Of A Fool. The Dowland pieces are delightful.

The use of classical guitar is unusual – Charlie Byrd was its best-known exponent – and Peare deploys its technique to interesting effect. It’s an attractive album, but the jazz standards aren’t totally pulling me in – yet.

It’s a rich Tristanoite brew, with improvising of multiple lines, unusual on guitar. That’s a challenging format, and it could be that with a bassist, it would swing harder – here, the time-feel isn’t incisive, and the most satisfying tracks are the ballads in free tempo. But it’s a very pleasant and enjoyable release.

Gordon Jack - 09 March 2019
This reissue finds Chet Baker in the somewhat unusual setting (for him) of a big band playing charts by Jimmy Heath, Phil Urso and Pierre Michelot. The band is...

Rale Micic : Only Love Will Stay