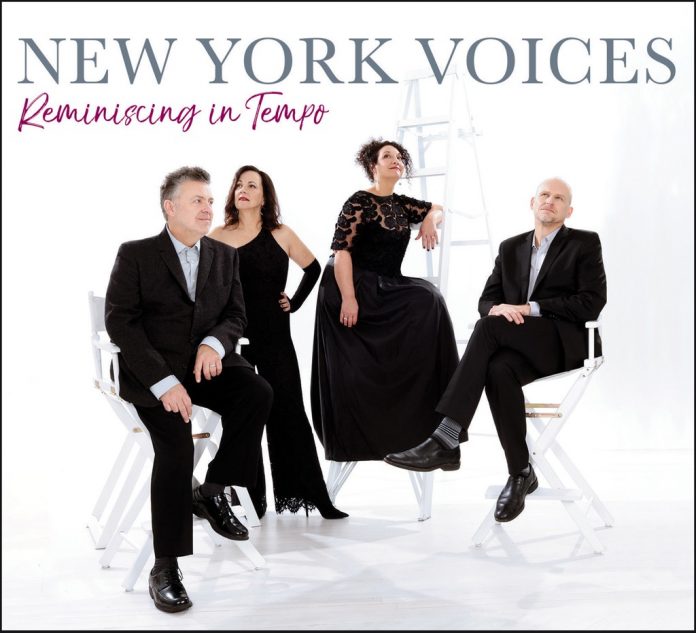 Round, Round, Round aka Blue Rondo A La Turk packs a real punch, just as it did back in 1959 when it was the opening title on Dave Brubeck’s hugely popular Time Out LP. Throughout that album Dave showed the jazz world that 4/4 was no longer the only way to go as his quartet explored a variety of intriguing time signatures.

The New York Voices combine Al Jarreau’s clever lyric for Blue Rondo which was introduced on his 1981 Breakin’ Away CD together with Lauren Kinhan’s vocalese which she has added to the original Brubeck and Paul Desmond blues choruses. The whole arrangement becomes a veritable tour-de-force of vocal harmony as it moves seamlessly between 9/8 and 4/4.

The contrapuntal Los Tres Golpes – sung a cappella – has an attractive Swingle-like feel and Darmon Meader’s Moments In A Mirror is another gentle bow to the baroque with Gabriel Hahn providing additional vocal and percussive effects.

The talented Meader is pretty much centre stage on an uptempo It’s Alright With Me. He has an inventive scat chorus with a brief reference to Tadd Dameron’s Hot House along the way before switching to the tenor for a very fine solo with a sound that reminds me a little of Harold Land. The New York Voices delve back to early 20th century popular music with Al Jolson’s 1920-vintage Avalon in an arrangement apparently inspired by Ray Charles.

Derek Ansell - 02 November 2021
This set of nine performances from 1999, made when Dave Jones was a part-time masters student at Kingston University, is released here for the first time along with Lone...