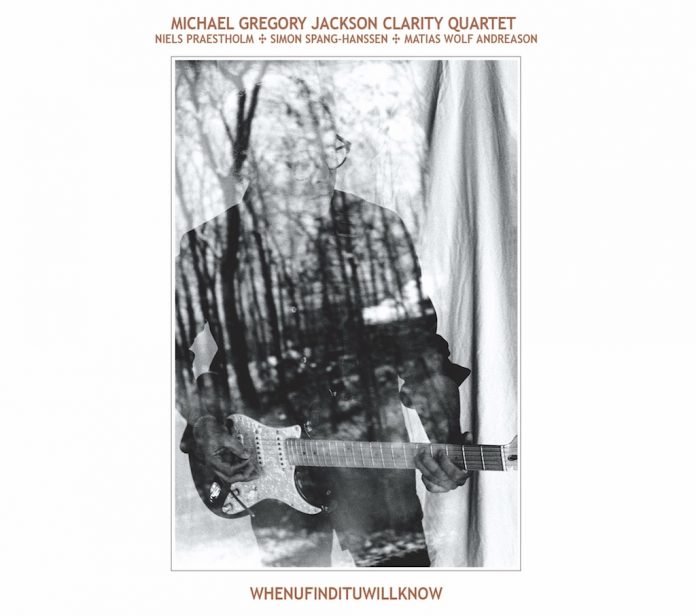 By any measure, guitarist and singer Michael Gregory Jackson seems to have had a pretty eclectic musical history. On signing to Island for his pop/rock album Situation X (Island,1983) he changed his name to Michael Gregory to avoid confusion with the other Michael Jackson but reverted to his original name in 2013. That album featured some big names including its producer Nile Rodgers, backing vocals on one track (No Ordinary Romance) from Steve Winwood and Anthony Jackson on bass guitar.

Jackson has worked with a wide spectrum of musicians and genres from the avant-garde or free jazz of Oliver Lake, Anthony Braxton, David Murray and Wadada Leo Smith to the jazz-rock of Carlos Santana, Vernon Reid and Steely Dan’s Walter Becker.

As if to reflect an encapsulation of Jackson’s varied career, Whenyoufindityouwillknow offers a variety of styles, ranging from the engagingly laid-back Bill Frisell-esque ballad Theme-X to the freneticism of Clarity 6, Spin and Clarity 3, which channel a cross between M-Base with electric-era Ornette Coleman. There is undeniably a fiery attack element to Jackson’s guitar style, which often operates on an angular staccato level. Yet he is also capable of silky legato lines, as heard in first half of the jaunty and aptly-titled Blue Blue.

Contrast the relaxed Latin overtones of Ah Yay with the doom-laden Collectors Of Social Dismay and the McLaughlin-y high voltage Souvenirs or the closer, Meditation In E which again sounds like McLaughlin but with an In A Silent Way (Columbia, 1969) feel; not a bad way to end this album’s hotchpotch of styles.

Jackson is indisputably an excellent guitarist and accompanied here by a trio of virtuosic Danish sidemen. But overall, the record’s attraction is somewhat diluted by the stylistic diversity of his compositions which, however good they are, and they are good, ultimately render the album somewhat discombobulating to the listener.

Francis Graham-Dixon - 18 August 2019
This is the fourth album from Kendrick Scott’s quintet, once more confirming Scott, of Terence Blanchard and Blue Note All-Stars fame, at the age of 39 as one of...