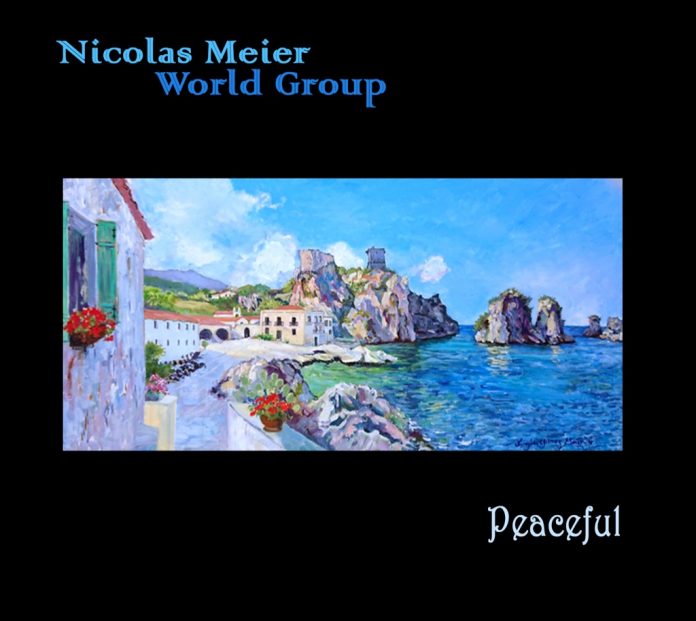 Guitarist Nicolas Meier, who’s been touring the world with Jeff Beck, and also with drummer Vinnie Colaiuta and bassist Jimmy Haslip to promote the album Infinity, refers to this band as an “acoustic world group”. But is jazz – whatever shape it has become – still integral to and recognisable in the music? It’s a question lots of jazz fans often ask. Perhaps players of Meier’s ilk seek in other music elements it shares with jazz.

Here Meier plays glissentar (an oud-like, fretless, 11-stringed piece), acoustic 12-string and their variables with violinist Richard Jones, bassist Kevin Glasgow and percussionist Demi Garcia. They embark on a journey as much geographical as musical if the ambient sound is any guide. Besiktas Cafe (Beşiktaş Café, given the Turkish clue?) is something we might hear in the background on Istiklal Avenue, Istanbul, while all around sip tar-like coffee and puff on nargiles, and Princes’ Island, with its echoes of the sitar and customary back-ups, flips us to the Indian sub-continent.

Guitar and violin have often been married in jazz but this music is largely without jazz antecedent. In upfront terms this is essentially a guitar album, with Smith given to longer-breathed phrasing against the spaces Meier sometimes reserves for more rapid dexterity, always impressive but not always necessary. In any case, the tone set is rhythmic, as in (patently) Manzanita Samba and (more subtly) Caravan Of Anatolia.

Some of the tracks, all Meier compositions, are more interesting than others. City Of The 3 Rivers is pleasant enough but only marginally enhanced by its length and its opportunities for guitar and violin elaborations.

Halfway through the title track it’s become clear that Jeremy Paul Carroll’s mixing and mastering is contributing to the fullness of sound, though the somewhat languorous feel throughout might be too much for those expecting from jazz musicians at least a nominal measure of zip. But then check the title. Meier has done zippy many times before.

Brian Payne - 13 August 2021
Julian Siegel has usually been seen leading small bands such as Partisans or his quartet or he’s been a sideman in the larger ensembles of others such as Mike...