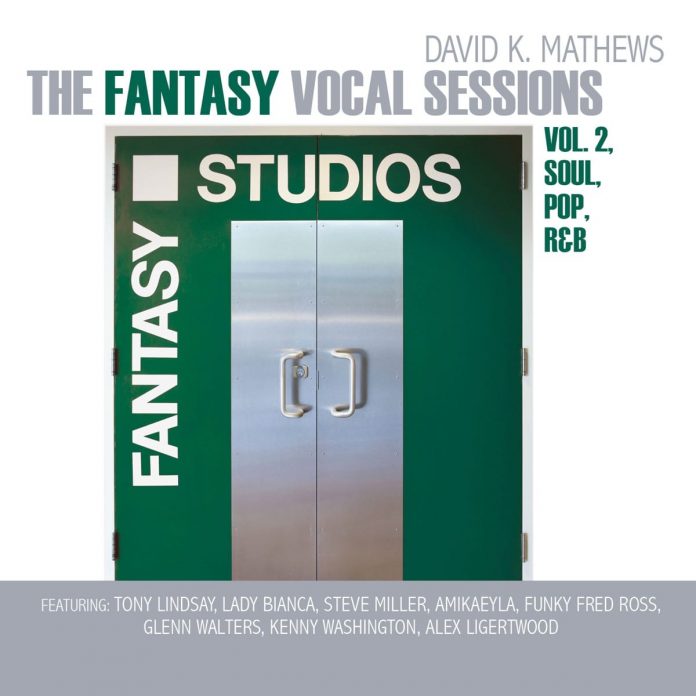 This is seriously out of my comfort zone given that it is just what it says on the tin – 11 examples of soul, pop and R&B performed by various combinations drawn from a pool of 40 musicians and vocalists.

The premise is classically simple: David K. Mathews, who plays keyboards of one kind or another on all tracks, determined to record a five-album tribute both to the Bay Area and the Fantasy Studios where the bulk of this, the second in the series, was recorded.

For accompaniment Mathews – who joined Santana in 2010 – draws on a pool that includes eight vocalists and six drummers which he perms in a sort of mix ’n’ match with brass, reeds and strings on seven numbers such as So Sweetly and You Had To Know, which are Greek to me, plus four – One Mint Julep, Going Out Of My Head, Wichita Lineman and Yesterday – with which I have at least a nodding acquaintance.

If we discount the fact that Jimmy Webb’s Wichita Lineman is performed by a female (Amikaeyla Gaston, featured also on For The Love Of You and Superwoman) all four numbers with which I’m familiar are performed conventionally.

I am unable to fault Mathews’ commitment both to the place where he grew up and still lives and the studio so dear to his heart and whilst not qualified to comment on the bulk of this album my instinct tells me he has done a great job and allows me to recommend the CD to anyone who enjoys soul, pop and R&B.

Michael Tucker - 16 September 2019
I hadn't heard Petersen before. However, after this thoroughly invigorating set of potent originals, realised with spot-on playing all round from a trio who really have that “three-in-one” thing...