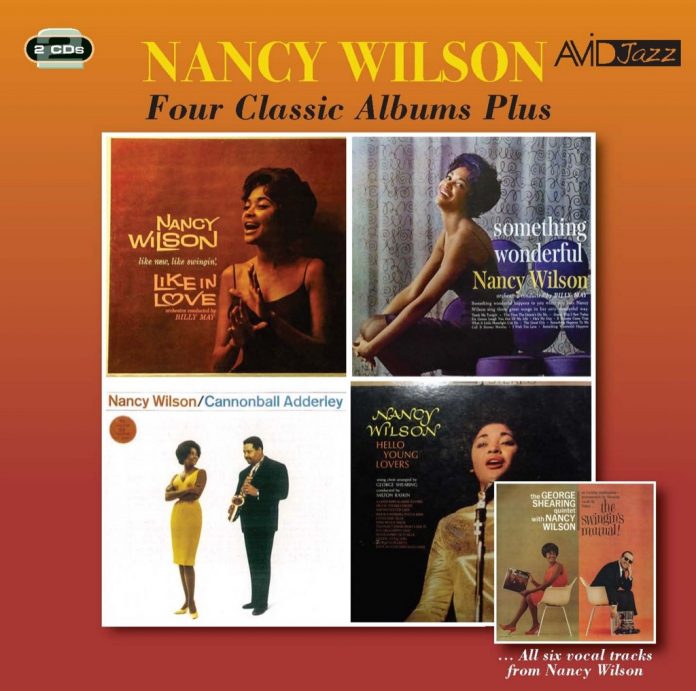 It’s hard to believe that the first tracks here, from Wilson’s debut album, were recorded 60 years ago. She was 22 at the time, sounds confident and is clearly thoroughly at ease with her material. These songs, and those on the second album all have Billy May’s arrangements and accompaniment, but it is Wilson’s singing that is in the spotlight.

Inserted before the third album are six tracks that bring forward Wilson’s jazz credentials. They were released as being by the George Shearing Quintet featuring Nancy Wilson (she does not sing on the six songs not included here) and the backing is a fine setting for the singer, Shearing’s arrangements putting on display her emerging talent.

More overtly aimed at the jazz audience is the third album. Original notes from some of the albums are included and from Ron Grevatt’s for this session it appears that Wilson had sat in on a Cannonball Adderley club date in Columbus, Ohio, which is where she was working at the time. She would have been only around 20, but she and the saxophonist hit it off musically and clearly relish working together on this 1961 reunion. Wilson does not sing on Teaneck, I Can’t Get Started, Never Say Yes or Unit 7.

On the fourth album, the mood returns to the popular canon and offers an interesting opportunity to hear George Shearing’s arrangements for strings (he plays harpsichord on Miss Otis Regrets). During this period in her career, Wilson was fortunate to have come to the attention of Dave Cavanaugh, executive producer of Capitol Records New York division and the four albums were released originally on (chronologically) T1319, T1440, T1657 and T1767, while Shearing’s The Swingin’s Mutual was on T1524.

An attractive reminder of a fine singer who appealed then (and still appeals now) to many.

Dave Foxall - 09 July 2019
Sinton’s solo bass clarinet intro, Mersible, bubbles up from the depths, a brief fragmentary illumination that serves only to deepen the shadows of possibility. Rainey and Hoffman arrive in...