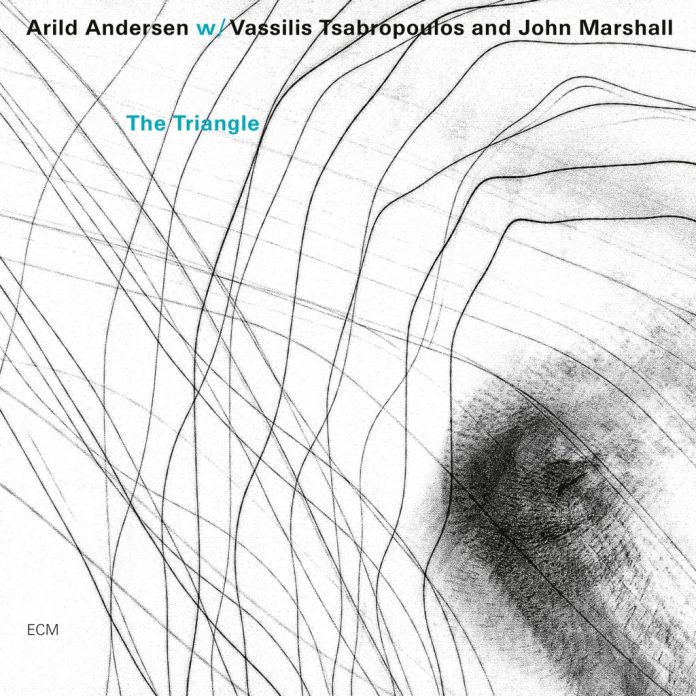 The Triangle, a release in the second tranche of Touchstoned, ECM’s 50th anniversary series, is the European triangle of Arild Andersen (Norway), John Marshall (UK) and Vassilis Tsaboropoulos (Greece).

Andersen is the leader, and the gorgeous sound of his booming bass is a pleasure throughout. Interestingly, though, compositional duties are shared with pianist Vassilis Tsaboropoulos. They include the latter’s delightful arrangement of Maurice Ravel’s Pavane, plus a free improvisation.

Ravel’s Pavane was the basis for the 30s hit song The Lamp Is Low, and the gorgeous melody remains a presence in popular music. (I’m reminded of James Parakilas’s comment that classical and pop performers introduce pieces differently – Tsaboropoulos, but not a classical performer, could introduce his Pavane by saying “It goes something like this…”)

Tsabropoulos is a name new to me – he’s probably best-known for his solo album on ECM, Akroasis, a set of interpretations of Eastern Orthodox hymns, would you believe. He began as a classical pianist but is here a totally idiomatic jazz improviser. His compositions are excellent, and here include gentle ballads like the beautifully plangent Cinderella Song, and the out of tempo Simple Thoughts. While Tsaboropoulos’s melodies are complex, they are also lyrical. Andersen’s Saturday, with its jazz-rock feel, builds momentum to a powerful climax. A richly-rewarding release.

Andy Hamilton - 05 April 2020
I've been hearing some excellent Canadian music lately – including jazz from Brodie West and now Mark Segger. This is the second album by the Mark Segger Sextet, following...