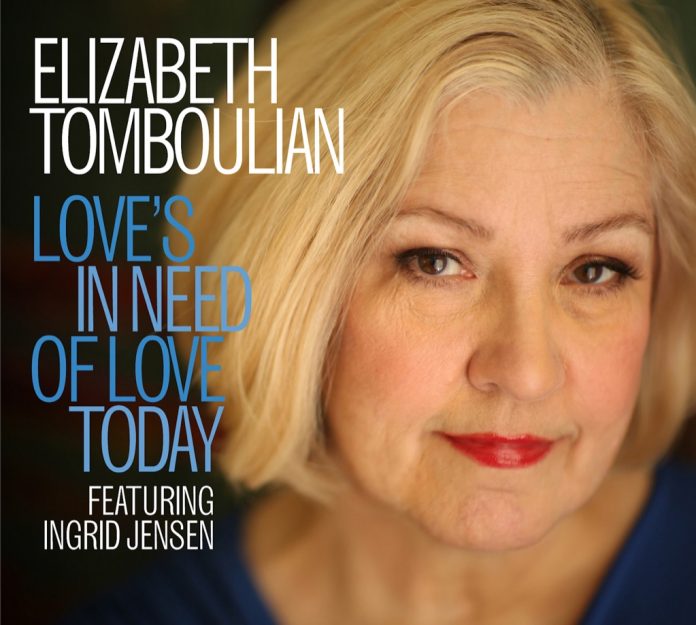 Although this is her debut own-name release, Elizabeth Tomboulian is a widely experienced singer with a long history of performing in multiple genres. Starting out in the 1970s as a blues and folk singer in Texas and her home state of Arkansas, she has also sung the music of Brazil and Uruguay, and has performed as a jazz singer-pianist, which included spells as house pianist in clubs in New Orleans and Boulder. She also worked a session musician and backing singer in Nashville.

This varied background is apparent from her song selection, which includes McCoy Tyner’s For Tomorrow (with her own lyrics), Re: Person I Knew by Bill Evans, Nutty by Thelonious Monk, and Mercy, Mercy, Mercy by Joe Zawinul (also with her lyrics).

In recent years, Tomboulian has been based in New York and her accompanists include regulars on the city’s jazz scene, Cliff Schmitt and Alvester Garnet, as well as her husband, guitarist Lee Tomboulian, and trumpeter Ingrid Jensen. Fellow singer Roseanna Vitro has important multiple roles here as producer, arranger (of four songs), and as backing vocalist.

Tomboulian’s vocal sound is airily light and she is especially at ease with mid-tempo songs. On some tracks, she is vocally backed by her husband and by Vitro. As will be apparent from her background, her piano playing is assured and she solos well on Nutty, while for I Get Along Without You Very Well it is Tomboulian alone accompanying her vocal. Jensen solos very effectively on some tracks, of which For Tomorrow and Tristeza De Amar are very good examples.

Some unusual songs appear here, among them Ballad Of The Snow Leopard And The Tanqueray Cowboy, which originates with poet David R. Rodriguez. This avoidance of over-familiar music adds to the air of freshness that permeates this album. Even when performing Good Old Wagon, a song with a very long history, Tamboulian makes it sound very much of today. A lot to like on this album, which should have wide appeal.

Fred Grand - 28 June 2021
This zinging collection of originals marks the recorded debut of bassist Vetle Aakre Laupsa’s dynamic piano-less sextet. The music was composed while he was studying in Stavanger but is...