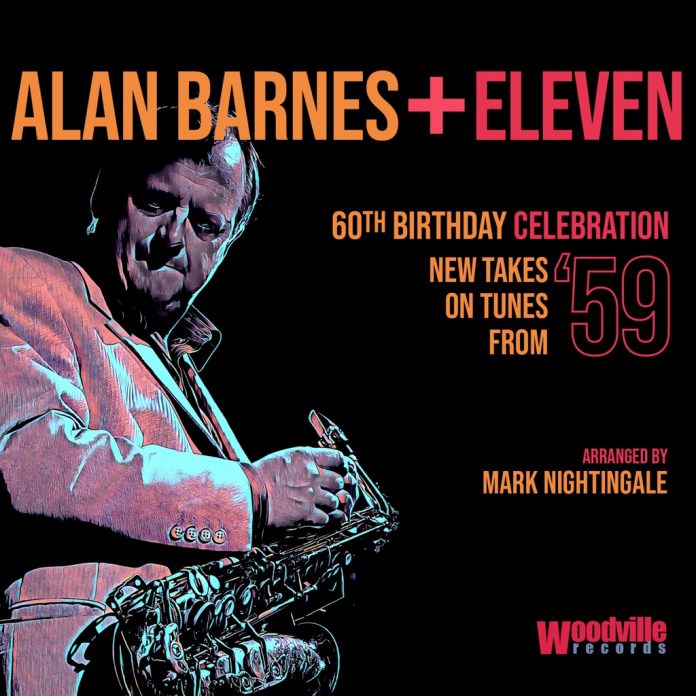 The extended title of this CD reads “60th Birthday Celebration: New Takes On Tunes From ’59”; subsequently we are treated to 11 selections taken from recordings made during Alan Barnes’s birth year. In particular, the saxophonist wished to replicate the concept of Art Pepper + 11, one of his favourite albums from that year.

The end result is a highly enjoyable album where a Henry Mancini composition (Dreamsville) appears alongside that of Thelonious Monk (Little Rootie Tootie) and Randy Weston’s Hi-Fly nestles next to Duke’s The Single Petal Of A Rose. Familiar material maybe but each tune is given a spring clean due to Mark Nightingale’s arrangements which are doubly effective given the high standard of soloing. On the final track, Horace Silver’s Blowing The Blues Away, all 12 musicians are given a chance to strut their stuff.

There are no outrageous liberties taken with the material, the original melodies held firmly intact – the surprises come from hearing a number of these tunes played by a larger ensemble than is normal and the original structures being extended. The section work is crisp, the swing element very high and the leader unveils his acknowledged prowess on his four chosen instruments.

Highlights include Barnes alto invoking the spirit of Paul Desmond on Take Five, the warmly delivered Basie-like feel of Quincy Jones’s A Change Of Pace, the Monk classic getting a full throttle workout and the axis of Nightingale/Barnes probing the possibilities presented by Hi-Fly.

Yet again, a Barnes-led release that his followers will undoubtedly enjoy.

Leon Nock - 17 December 2020
The D in 3D stands for Diva, the 15-piece all-female orchestra led by drummer Sherrie Maricle, who is also active in 3D and Five Play. The other two members...