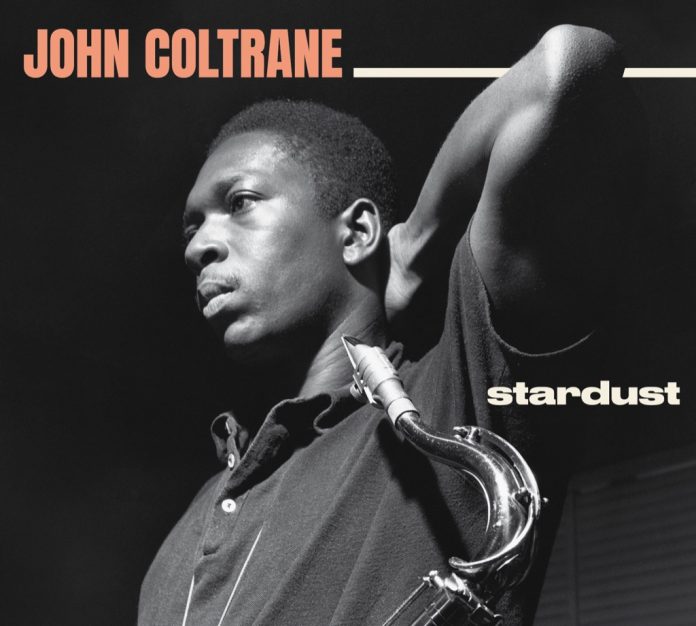 It should be noted that this is not just a re-release of Coltrane’s album Stardust, but includes the album Standard Coltrane. Standard Coltrane was originally released in 1962, and Stardust in 1963, both by Prestige Records after Coltrane had left the label, in the wake of his success at Atlantic. The relation between the two is the line-up, as the resulting recordings from two sessions recorded in 1958 were used to create the albums.

The first session, from 11 July 1958, includes Wilbur Harden, Red Garland, Paul Chambers and Jimmy Cobb. The resultant tracks make up the entire Standard Coltrane album, as well as two featured on Stardust. The second session, recorded 26 December, has Freddie Hubbard on trumpet and Art Taylor on drums, as well as Garland and Chambers, and of this session two of the tracks, Time After Time and Then I’ll Be Tired Of You, appeared on Stardust.

As a compilation, the two albums fit together well. They represent some of the last recording sessions with Garland and Chambers, as Coltrane moved toward the avant-garde, going on to play with musicians such as McCoy Tyner and Steve Davis. The complication therefore reflects Coltrane’s earlier career, as his relationship with Garland and Chambers is perhaps most associated with the time he spent in the Miles Davis Quintet, as well as the albums John Coltrane With The Red Garland Trio and Soultrane.

The two albums blend together naturally, from the slow and thoughtful Time After Time to the upbeat Love Thy Neighbour and the energetic Spring Is Here. There are excellent moments throughout, including Wilbur Harden’s wonderfully smooth solo on Don’t Take Your Love From Me, and the title track Stardust demonstrating Garland’s famous block-chord technique as well as a bowed solo from Chambers. This compilation is a great example of Coltrane as expert saxophonist in a line-up of legendary musicians, and himself only months away from international acclaim.

Fred Grand - 16 January 2021
The burgeoning career of pianist Dominik Wania owes a great deal to his exposure in Maciej Obara’s new quartet with Ole Morten Vågen and Gard Nilssen. He was classically...