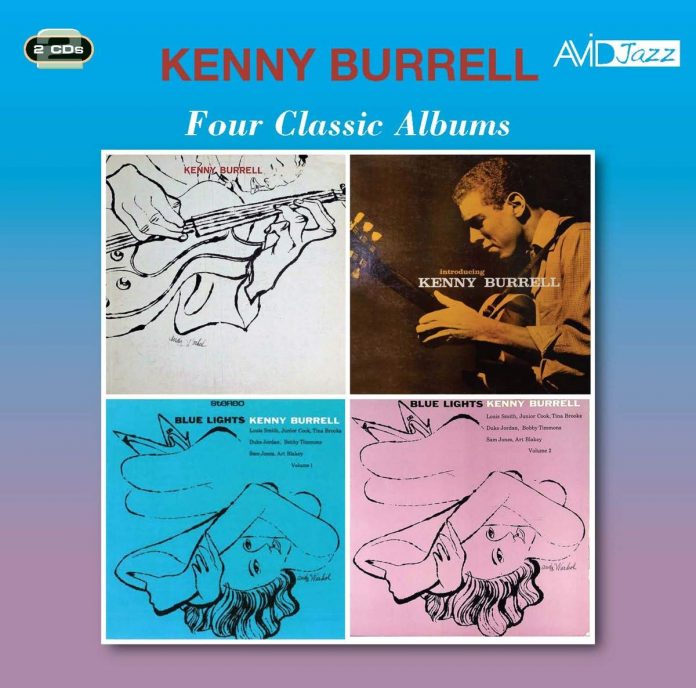 Kenny Burrell is a bit of an enigma. As a huge fan of jazz guitar, I hold him as one of my heroes. Yet he has never reached the popularity of other jazz guitarists such as Wes Montgomery; and the problem seems to be rooted in the question as to whether Burrell is a true soloist or just a great sideman. For me, he is both, but he makes such a fantastic job of supporting others that the spotlight does not shine as bright as it should when he sits at the front of the stage.

Coming from a musical family in Detroit, Burrell began playing guitar as a teenager and soon found work in Detroit supporting visiting musicians. It was one such encounter with Dizzy Gillespie in 1951, that got Burrell his first session recording. A move to New York after finishing his degree at Wayne State University saw Burrell being used as a regular session musician by Blue Note, Savoy and other record companies. Check out Kenny Burrell and John Coltrane (1958, NewJazz/OJC) for something different. Such was his style (not dissimilar to Charlie Christian’s) that it wasn’t long before he was offered his first solo outings and the albums Kenny Burrell and Introducing Kenny Burrell were the result.

It probably says a lot about the itinerant life style of jazz musicians that over a dozen sidemen accompany Burrell on his debut album Kenny Burrell, but never more than five of them are ever heard on the same track. Yet what splendid sidemen they were – Frank Foster, Tommy Flanagan, Bobby Timmons, Oscar Pettiford, Paul Chambers Kenny Clarke amongst others. Introducing Kenny Burrell (recorded about the same time as his debut album) shows a smaller and more consistent number of musicians but still of the same pedigree.

The majority of the tracks were recorded at the Van Gelder Studios in Hackensack, New Jersey and have that unique RVG quality to them. The music is varied and a little eclectic, ranging  from bebop (“Mexico City”, “Cheeta”, “How About You”?), the bluesy (“Now See How You Are”, “Fugue N’ Blues” and “Blues for Skeeter”) to the up-tempo and swinging (“Get Happy”, “Phinupi” and “Moten Swing”). The stand out tracks for me are “But Not for Me” – a beautiful and melodic interpretation of the Gershwin standard and “Weaver of Dreams”. But so strong is the supporting cast and so varied is the interplay between the musicians, you would be hard pushed, just by listening, to recognise either album as solo outings by a significant jazz guitarist. Blue Lights  Volumes 1 & 2 are live “blowing”sessions but a cut above the average as they should be with the likes of Burrell, Sam Jones, Duke Jordan and Art Blakey on board.

Burrell’s place in jazz history is not in doubt, just his ranking in the league of solo jazz guitarists. His later work with Gil Evans (Guitar Forms) and his two-volume project Ellington Is Forever, not forgetting the classic Midnight Blue, are testimony to his fabulous talent. Burrell also spent a lot of his later life teaching (becoming professor and director of jazz studies at UCLA) and encouraging young new talent. At 86, his influence is still being enjoyed in the world of music and long may it continue.

Fred Grand - 09 June 2022
While Sgobbio may be better known for his work with groups Pericopes (+1), Silent Fires and Hitra, solo piano is an important aspect of his creative life. His 2010...