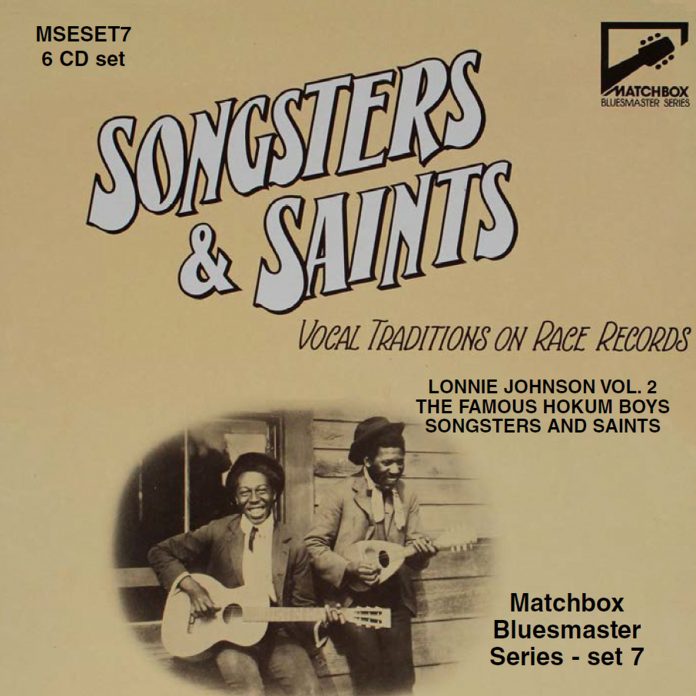 Following previous reviews of this groundbreaking series I am running out of superlatives to use. It is the last of the planned sets, but I believe other recordings may follow. Set 7 contains six CDs, accompanied by extensive notes from blues historian Paul Oliver. There are some wonderful and memorable tracks on these final albums which bring the series to a fitting end.

These early blues recordings were termed “race recordings” by the white-owned record companies and were intended for an exclusively black audience. The same record companies also issued “hillbilly” music for white audiences. But however polarised the intended market was, we now accept that these recordings form the foundation of almost everything that came later in terms of rock ’n’ roll, R&B, Motown, soul and other forms of popular music.

Disc 1 features Lonnie Johnson. There is little doubt that Johnson stands out as someone who has influenced several generations of blues guitarists, who adapted and developed his “one-string” solos into the modern, electric blues-guitar style we take for granted today. B.B. King frequently cited Lonnie Johnson as a greater influence on him than Robert Johnson. But what of Lonnie’s legacy as a singer and composer of hundreds of blues songs? A recent count for a new book on Johnson (The Inconvenient Lonnie Johnson by Julia Simon) puts the total number of recordings he made at 724. Not all of these were blues recordings, since Johnson also played jazz with artists such as Duke Ellington and Louis Armstrong and was hugely influential on artists such as Charlie Christian and Django Reinhardt. But the majority were and they provide convincing evidence that Johnson was indeed the real deal. Tracks such as Back Water Blues, Careless Love and Death Valley Is Just Halfway To My Home are fine examples of Johnson’s work.

Disc 2 features The Famous Hokum Boys. Hokum was originally a jazz term for “faking” or improvising, but in the blues, it became something quite different. It developed into music played at social gatherings with the sole aim of entertaining. Superficially, it was presented as skilfully played but lightweight material; however, underneath the jokiness and playfulness there was often a more serious intent. Paul Oliver observes that there was “a measure of sophisticated cleverness there too, which places the audience at a slight disadvantage”. The songs were frequently riddled with double-entendre jokes, sexual innuendos, knowing looks between the musicians and skilfully crafted lyrics. The Famous Hokum Boys were northerners and this allowed them to bring a lighter approach and greater sophistication to the idiom. Tracks such as It’s Tight Like That, Somebody’s Been Using That Thing and What’s That Smell? are representative of the style.

Discs 3 to 6 feature Songsters & Saints Volume 1 & 2. According to Oliver, the preoccupation with race records issued specifically for black purchasers in the 1920s drew attention away from the other vocal traditions such as the songs of the southern rural dances, comic and social songs, ballads of the medicine shows and travelling entertainers. Even more neglected has been the sacred vocal traditions of the Baptist and sanctified preachers, the gospel songs of the church congregations and the “jack-leg” (incompetent or dishonest) preachers and street evangelists. The 72 tracks on these four discs were selected by Oliver to be representative of all these styles.

Whilst the record companies were interested in recording these songs, it was not done with the same thoroughness as those intended to reach a commercial audience. Yet whilst eclectic and diverse, they offer a unique insight into the many kinds of black song as they were heard in the early 20th century. These songs are old and rarely heard, but they should not be forgotten in our fascination with more accessible forms of blues and gospel music. It is impossible to select a few tracks as representative of the idiom because the range is so diverse. They are all worthy of a listen, as is this entire series.

I have said it many times, but Matchbox/Nimbus do deserve our praise for their work in keeping this music alive. They also deserve our support, and I would wholeheartedly recommend that you go out and buy one or more sets from this groundbreaking Bluesmaster Series.

Steve Voce - 25 July 2021
Peggy was perfectionist and a great jazz singer, so when things become a bit commercial one always has the techniques to admire. There are some of her classics here -...