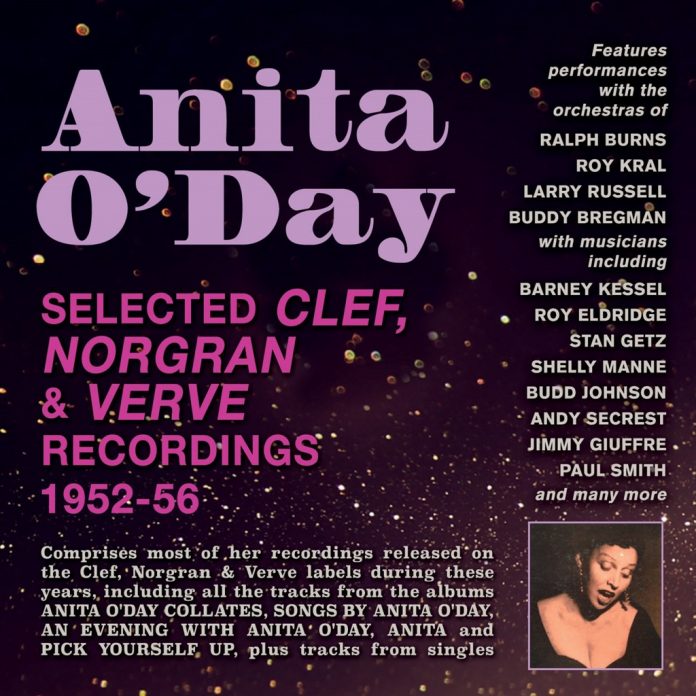 Following her explosive early 1940s spell with Gene Krupa’s band, the first half of the 1950s was a golden time for Anita O’Day. Working with Norman Granz, she made several albums, all with well-chosen material, on which she was backed by top session musicians as well as some of the best West Coast jazzmen of the era. O’Day’s throaty sound, allied with her superior rhythmic sense, are especially suited to uptempo songs where her command is sure and certain, and even when at breakneck speed her articulation is crystal clear. These qualities lend themselves well to scat, and her assurance is notable (although there are very few examples of this here).

All of this might lead to the assumption that she would be less at ease with ballads. Nothing of the sort and it is balladry that makes up the bulk of the repertoire. This was probably at Granz’s insistence, as the 1956 sessions coincide with his work on Ella Fitzgerald’s series of songbook albums. However motivated, O’Day is clearly at ease and happy with the mood. Her understanding of the emotional core of lyrics is always evident and while she makes the songs her own, there is never anything in her variations that does disservice to the writers.

Most notable of all is her phrasing, which is where O’Day confirms her status as one of the top handful of truly outstanding jazz singers in the real sense of that misused term. Her vocal sound is often edgy, a quality especially fruitful on dark songs like Frankie And Johnny.

Another quality is an underlying hint that she sees humour in some of the material even if the theme is serious; Anita’s Blues is an example of this. Although noted for her quicksilver delivery, O’Day is hugely effective on slow-tempo songs, such as the languorous I Didn’t Know What Time It Was and You Don’t Know What Love Is. Whatever the mood, O’Day clearly enjoys all that she does and even when having fun she is never anything less than 100% serious about her singing.

As a glance at the instrumentalists involved here will show, there is a vast amount of talent in support. Among the soloists heard here are Roy Eldridge (t), Paul Smith, Jimmy Rowles (p), Barney Kessel, Tal Farlow (g), Milt Bernhart (tb) and Larry Bunker (vib). The larger ensembles under Buddy Bregman’s direction are crisp, attacking his charts with precision.

Altogether, a very musical reissue. Excellent songs, high standards, and always in the spotlight one of the finest jazz singers of all time captured in her prime. Accompanying the CDs is a long and detailed liner by Paul Watts. For those with O’Day albums already on their shelves, the songs heard here were originally released on the five LPs: Anita O’Day Collates, Songs By Anita O’Day, An Evening With Anita O’Day, Anita and Pick Yourself Up, to which have been added a couple of singles.

Hugh Rainey - 11 February 2022
Newton was dogged by bouts of ill health and some personal misfortune, and his diverse activity and somewhat diffuse recording legacy brought no major hit records under his own name, which consigned...