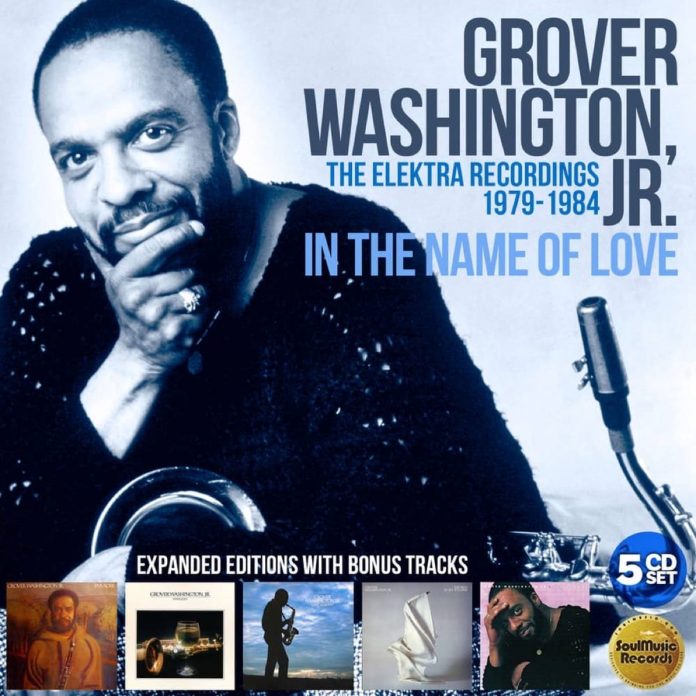 Grover Washington Jr. is to the jazz saxophone what George Benson is to the guitar. Both are fabulous musicians, whose roots are undeniably jazz. Yet each had the talent and capacity to bridge sub-genres of jazz and even whole genres of music. However, Washington has never been given the jazz credentials he deserves, which is surprising given his earlier work with Kenny Burrell, Hank Crawford, Dexter Gordon, Eddie Henderson and Lonnie Smith.

If you have doubts or are unfamiliar with his music, then this new five-CD compilation is worth a listen. The collection covers Washington’s work for Electra between 1979 to 1984, before he moved on to Columbia. This appears to be the first anthology of his work to focus on the Elektra years and complements the 2019 anthology of Washington’s recordings for Columbia (Sacred Kind Of Love).

The box set includes a very readable commentary by music journalist Charles Waring and a couple of personal tributes from saxophonists Najee and Gerald Albright. The original liner notes are not included and nor is a list of the musicians who played with Washington on each album.

This collection is marketed with a heavy smooth-jazz accent and with emphasis on Washington’s work that gained popular acceptance such as the million-selling Winelight LP, featuring hits like Just The Two Of Us (with Bill Withers) and The Best Is Yet To Come (with vocalist Patti LaBelle). There are also 19 single edits included as bonus tracks, which is overkill and tips the balance away from this being a celebration of the original recordings.

For me the real essence of Washington is captured in the tracks that do not have a named guest vocalist, didn’t chart or receive a Grammy nomination and which show Washington playing saxophone at its purest and simplest. This is when he plays not only some of his best music but also when he is at his most creative and relaxed, using his uniquely personal signature sound of extended and bent notes to best effect.

He was a virtuoso on pretty much every type of saxophone and the standout album for me in this collection is Paradise, which was his first for Elektra and probably driven more by Washington than the Elektra label. That is not to say that the others are in any way poor, but the pull towards greater commercialism, the use of programmed music and the urgency to imitate the success of Winelight is evident with each release.

Washington died prematurely, aged 56, and although he has left a relatively large collection of work, it is easy to overlook what a talented and influential musician he was, despite being shunned in more mainstream jazz circles. As jazz keyboardist Jason Miles once said: “Smooth-jazz was an embarrassing name for great musicians. Everything was moving along fine when it was called ‘contemporary jazz’ and artists like Pat Metheny, Weather Report and Fourplay were writing commercial songs but playing some serious music. Then the labels started chasing Kenny G music and… Grover got caught in that crunch.”

My guess is that were he alive today Grover would have written another musical chapter by now. Whether that would have taken him back to where he started or further away is something we will never know. What I do know is that he deserves more recognition than he is given.

Discography
CD1: [Paradise] Paradise; Icey; The Answer In Your Eyes; Asia’s Theme; Shana; Tell Me About It Now; Feel It Comin’; Tell Me About It Now (Edit); Feel It Comin’ (Edit) (47.32)
CD2: [Winelight] Winelight; Let It Flow (“For Dr .J”); In The Name Of Love; Take Me There;; Just The Two Of Us; Make Me A Memory (Sad Samba); Let It Flow (For “Dr. J”) (Edit); Winelight (Edit); Just The Two Of Us (Edit); Make Me A Memory (Sad Samba) (Edit); Take Me There (Edit) (55.18)
CD3: [Come Morning] Easy River Drive; Come Morning; Be Mine (Tonight); Reaching Out; Jamming; Little Black Samba; Making Love To You; I’m All Yours; Be Mine Tonight (Edit); Reaching Out (Edit); Jamming (Edit); East River Drive (Edit) (52.02)
CD4: [The Best Is Yet To Come] Can You Dig It; The Best Is Yet To Come; More Than Meets The Eye; Things Are Getting Better; Mixty Motions; Brazilian Memories; I’ll Be With You; Cassie’s Theme (The From Cassie & Co); Brazilian Memories (Edit); I’ll Be With You (Edit); The Best Is Yet To Come (Edit); More Than Meets The Eye Edit) (52.34)
CD5: [Inside Moves] Inside Moves; Dawn Song; Watching You, Watching Me; Secret Sounds; Jet Stream; When I Look At You; Sassy Stew; When I Look At You (Edit); Secret Sounds (Edit); Inside Moves (Edit); Sassy Stew (Edit) (52.31)
Washington Jr., saxophone on all tracks. Details of other musicians and recording dates not provided.
Soul Music Records QSMCR5202BX