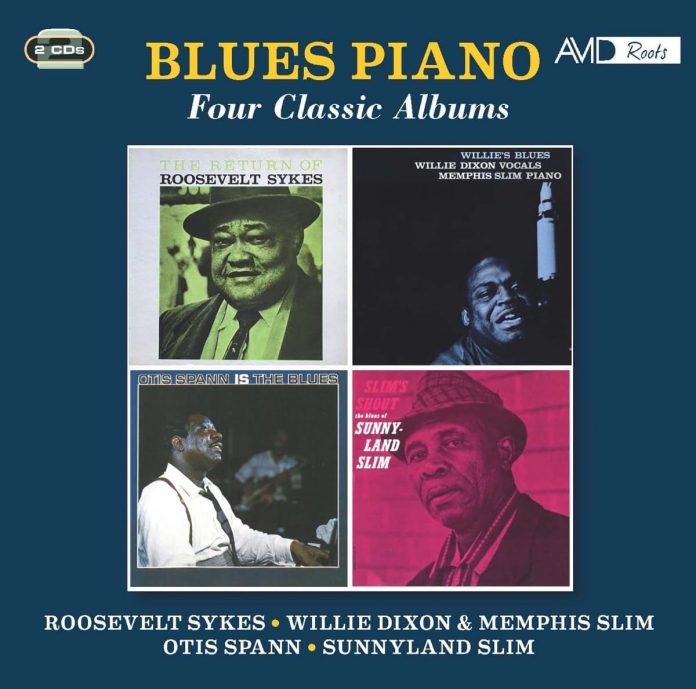 Avid have done a really fine job with this collection. Four very different artists and yet four artists with a lot in common. The emphasis on the collection is clearly blues piano but because of the calibre of the artists and their sidemen, there is so much more to enjoy. With three out of the four albums being recorded by Rudy Van Gelder, this release also promises quality.

Roosevelt Sykes (born Arkensas 1906 or St. Louis 1913 depending on who you believe) came up the traditional way, learning organ from his preacher grandfather as a boy. He changed to piano at the age of 12 and got his first recording break with Okeh in 1929. He subsequently signed for Victor and then Decca where he had two notable single successes with Night Time Is The Right Time and The Honeydripper, which earned him his nickname.

Sykes dipped below the radar for several years (mainly playing clubs on the Chitlin’ Circuit), until Memphis Slim persuaded Prestige records to record and release Sykes’s first album for over five years. The album title, therefore, refers to Sykes’s return to the recording studio and not to the music scene. This is an album of R&B, with Sykes being one of the best exponents of the style.

Willie Dixon (born Vicksburg, Mississippi, 1915) is perhaps the most famous of the bluesmen in this collection and one of the most prolific songwriters in the history of blues music. In some respects, Dixon is probably better known as a songwriter than as a performer, with many people having heard his songs but not necessarily heard Dixon performing them. His most famous songs include Hoochie Coochie Man, I Just Want To Make Love To You and Spoonful.

On this album, Dixon is accompanied on piano by an equally forceful personality in the form of Memphis Slim (born John Len Chatman in Memphis, Tennessee, 1915). Slim spent most of the pre-war years performing in clubs, bars and dance halls before moving to Chicago in 1939, where he began working with Big Bill Broonzy. His most notable success during this period was the 1949 release, Nobody Loves Me, but which became better known as Every Day I Have The Blues.

As a respected blues musician, it was no surprise that Slim was asked to play on Dixon’s first album and given equal credit. This was Dixon’s debut as a vocalist and without rehearsal (but under the guiding eye of Van Gelder) the results are authentic more than sophisticated. These two artists were made for each other and the playing on this album is real masterclass of how good simple country blues can sound.

Otis Spann (born Jackson, Mississippi, 1930) is one of the leading post-war blues pianists. He grew up in a musical family and began playing piano at the age of seven. In his early teens he was performing in local bands. At the end of the WWII he relocated to Chicago, where his distinctive piano style earned him regular sessions with Muddy Waters, Bo Diddley and Howlin’ Wolf. Despite being signed by Chess, his recording successes were limited. His reputation was built, however, as a talented session player and pianist for Muddy Waters, with whom he worked until 1968.

Spann is representative of what was the last wave of thoroughly authentic blues storytellers. This album is also remarkable for featuring Robert Johnson’s stepson, Robert Lockwood Jr. on guitar and shared vocals. This was Spann’s first album on own and Lockwood Jr’s first recording in many years. This is a recording of raw blues, the themes of which would be immediately identifiable to the black audiences Spann would play to at Smitty’s Corner and other clubs in Chicago. Otis In The Dark is the standout track for showing off Spann’s talent to the full.

Sunnyland Slim (born Albert Luandrew, Quitman County, Mississippi, 1906) is the least well known of the artists on this compilation. Like many others, he moved to Chicago in the great migration of black workers from the south. He played sessions with Muddy Waters, Robert Lockwood Jr., Howlin’ Wolf and Little Walter. His stage name is said to emanate from the song Sunnyland Train. His vocal style is “declamatory” and similar to B.B. King’s. His piano playing is characterised by heavy basses and vamping chords with the left hand and tremolos with the right. What makes this album a different from the others is the use of organ to accompany the piano.

With this compilation, Avid have done a fabulous job in presenting the very best of post-war blues piano. Each musician had a unique and individual journey to make to achieve the success and enduring popularity they did. Yet in many ways, their stories are remarkably and depressingly similar. Thankfully, post-war recording techniques were so much better than the poor-quality “field” or “race-record” recordings of the 1920s and 1930s. These recordings are a wonderful legacy to their individual talents and the role of the piano in the development of post-war blues. There is absolutely nothing to dislike.

Brian Payne - 15 December 2019
The band’s name is derived from the initials of its co-leaders, Brandon Allen and Tim Lapthorne. Although it’s a relatively new formation the pair have collaborated in various settings...