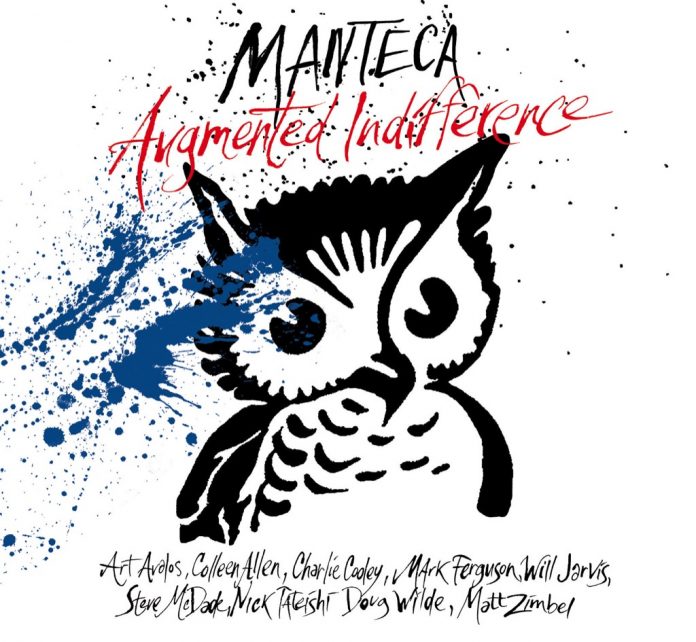 The Canadian band Manteca was formed in Toronto 41 years ago by leader and percussionist, Matt Zimbel and former bass player Henry Heilig. Whilst personnel have changed over the years several members of the original line up are still going strong. Augmented Indifference is their 13th album. All compositions and arrangements are by Zimbel and pianist Doug Wilde.

I wouldn’t even try to categorise their music other than to suggest it’s a blend of funk, Latin rhythms, worldbeat, jazz rock, contemporary improvisation and synthesizer technology. Perhaps the term “pan-fusion” comes close.

The title of the first number, Miss Meteo, is from the Quebec French-language comedy Miss Météo. It has a heavy bass beat, eerie, dream like voices, triumphant trumpet, rampant electric guitar, pulsing alto clarinet and spirited percussion. Busking In Deadwood has a striking melody featuring splendid accordion soloing, echoed voices and dramatic trumpet. It would rate highly as a soundtrack for a spaghetti western. Avant Cool has a catchy salsa beat with a sometimes wistful melody that combines alto flute with piano and guitar.

Kowabunga is the band’s tribute to the Beach Boys but without the latter’s vocal harmonies. It has an enticing bass guitar intro (recalling to some extent the Newbeats’ odd 1964 hit, Bread & Butter), propulsive tempo and tension-building trombone. High-frequency tones and stirring organ lucidly evoke the electro-theramin in Good Vibrations.

Braced by a phalanx of drums, congas, djembe, timbales and the like, the four tracks in total last an energetic 20.46 minutes. In short, the album is akin to an EP rather than LP but Zimbel says it’s half the normal price. If you’re a Manteca enthusiast, the impressive arrangements, accomplished musicianship and dynamic effort that’s clearly gone into this driving kaleidoscope of sound is well worth it.

To buy Manteca: Augmented Indifference go to manteca-music.com or Amazon