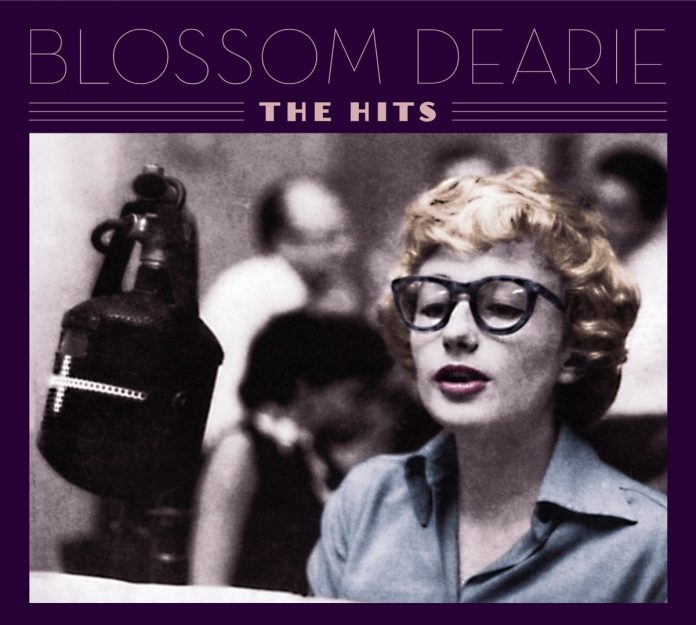 As a student of irony I anticipate at the very least a “gentleman’s C” out of this release; for one thing it’s titled The Hits yet one looks in vain for I’m Hip, My New Celebrity Is You, Peel Me A Grape, etc and if Blossom’s version of Give Him The Oo-La-La was a hit it must have been in Mandrake Falls where everyone is pixilated, or Barnsley where Cole Porter is chilled stout.

Then there’s the image; when we think of Blossom we imagine someone tiny, delicate, fragile as one of the creatures in Laura’s glass menagerie, not a robust pioneer woman shushing larks in “meaders” or sidling up to the indigo-hued Lover Man in a Balenciaga gown.

Don’t get me wrong, I’m not dismissing this album out of hand; au contraire, I have no hesitation in awarding it five stars, it’s just that I didn’t give Blossom credit for having such a range; from the heavy hitters – Cole Porter, Dick Rodgers, Gershwin – to the very respectable – Harold Arlen, Arthur Schwartz, Cy Coleman, Vinnie Youmans – to the “in-crowd” favourites – Murray Grand, Bart Howard, Charles Trenet.

Most people who know him at all tend to dismiss Bob Haymes (Dick’s kid brother by seven years) as a one-trick pony, citing That’s All as his sole claim to fame. Blossom knows better. She recorded his They Say It’s Spring elsewhere and here she weighs in with Now At Last. She lived in Paris for a while in the 50s so four of the selections are performed in French. Older readers may recognise Plus Je T’Embrasse as Heart Of My Heart, written in 1926 by Ben Ryan, revived and taken into the charts by The Four Aces in 1953, and given a new coat of Gallic paint, with lyrics that had no connection with Ryans’, by Max Francois in 1954.

In about 80 per cent of cases the CDs I review for JJ are played once, written up, and consigned to the ether, but this is one I’ll return to often.

Discography
Deed I Do; Tout Doucement; Rhode Island Is Famous For You; Now At Last; Boum!; Dance Only With Me; Tea For Two; Someone To Watch Over Me; Plus Je t’embrasse; Manhattan; Try Your Wings; Chez Moi; Lover Man; Between The Devil And The Deep Blue Sea; Once Upon A Summertime; Let Me Love You; Give Him The OO-La-La; J’Etang; Dearie’s Blues; The Surrey With The Fringe On Top; Comment Allez Vous; Love Is Here To Stay; You Fascinate Me So; Little Jazz Bird. (74.20)
Dearie (p, v) with small groups featuring Herb Ellis, Mundell Lowe, Kenny Burrell (g); Ray Brown, Red Mitchell (b); Jo Jones, Mel Lewis, Ed Thigpen (d); Jimmy Rowles (p). New York, Los Angeles, 1956-1960.
New Continent 648067

Brian Morton - 16 September 2019
Nice touch to open with a slow-slow arrangement of Body And Soul on this intriguing set of repertory pieces, which also features lines by Wayne Shorter, John Coltrane, Joe...

Jazz Journal - 28 February 2020
With this, Wynton Marsalis has come up with his most interest­ing album thus far. That is not to say that it is entirely flawless, but it kindles a spark...