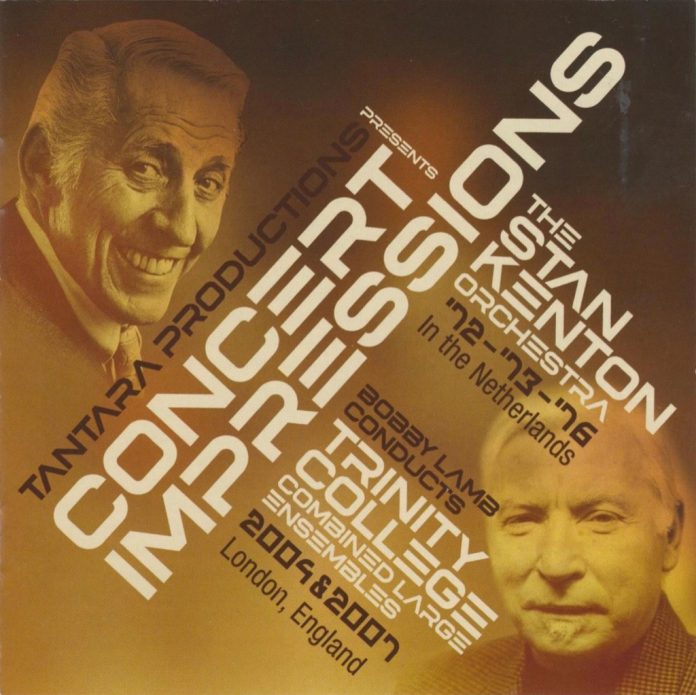 Bobby Lamb has no need to fear such close association with Stan Kenton, for although his musicians didn’t have the night-upon-night familiarity with their music, they more than made up for it with youthful enthusiasm. The result is a very satisfying double CD indeed.

I’m not as familiar with 70s Kenton as I am with other periods, but the main planks of the orchestras are as sound as ever they were. There might not be so many big names here – hardly any – yet the standards are impeccably high. Good section leaders abound, as do fine soloists. And with material from the likes of Bill Holman, Hank Levy and Ken Hanna, quality is assured.

The highlights are many, with a major one being the Kentonian “slow ballad” treatment of Send In The Clowns. This arrangement by Dave Barduhn hits right into that moving style which began with Here’s That Rainy Day and it includes an amazing climactic display of high-note trumpet and power from Jay Sollenberger. Artistry In Percussion is revived for John Von Ohlen and he and the other two drummers in variants of the band, Peter Erskine and Gary Hobbs, are supplemented throughout by the driving conga of Ramón López. The ever-reassuring Dick Shearer has charge of the trombones and the resurrection of the great tenorist Richard Torres comes in the form of a long solo on Holman’s Malaguena. Those who savour the rare solos of altoist John Park will find two more here and Kenton’s particularly well-recorded piano work is of his very best. He has a feature on Body And Soul, benefiting from the wonderful acoustics of the hall.

One wonders how Bobby Lamb ever got through so much writing for his students as well as teaching them. At one stage at least, there are over a hundred musicians on stage. While he is one of the greatest orchestrators in the big band idiom, Bobby leaves more freedom for soloists that any other writer, often allowing room for individual interpretation of his scores. Gerald Presencer plays his Concerto and produces lovely flugel on Bobby’s Valentine Blue, which also features his daughter Sioban on flute.

Simon Adams - 04 September 2019
Swiss-born singer Susanne Abbuehl’s second set for ECM now makes a reappearance as one of ECM’s 50 Touchstones for its 50th birthday celebrations. Rightly promoted as a literary voyage on...