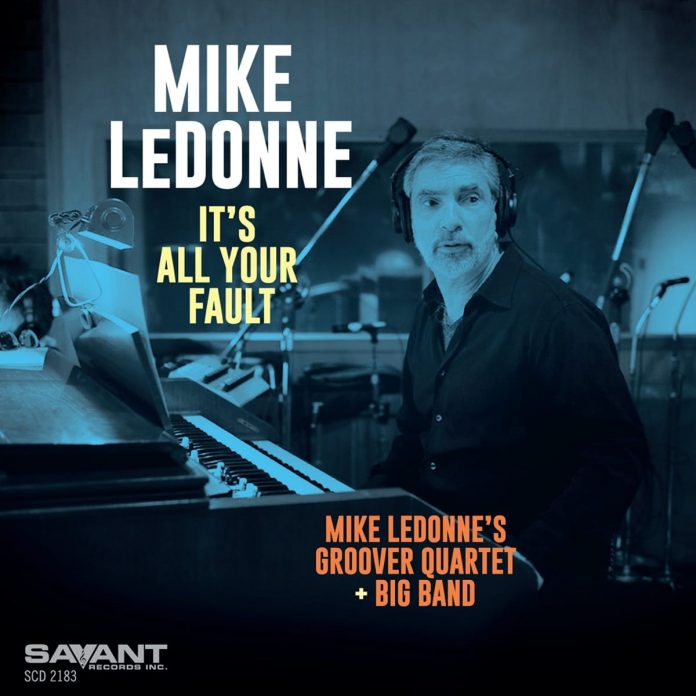 LeDonne blames Dr. Lonnie Smith for inspiring him to play jazz organ although many listeners will hear more of that other Smith, Jimmy, in this music. LeDonne here pays tribute to DLS with one session from his Groover Quartet and another from his big band.

The quartet tracks are in the classic Smith tradition with tenor sax, guitar and drums supporting the leader and the three pieces on offer here all have that hard swinging, grooving blues feel about them. Alexander is a good foil for LeDonne on tenor sax and guitarist Bernstein comes into his own as a free- flowing soloist on these selections. LeDonne plays hard, hitting a good groove from the start of each track and keeping the momentum going nicely with blues licks, long sustained notes and the impression that he is really enjoying himself.

Recorded at Van Gelder’s studio by his one-time assistant Maureen Sickler, the sound has that old, groovy Blue Note feel that her boss came up with.

The big band kicks off with It’s All Your Fault, the title intended to indicate that the record is dedicated to Lonnie Smith. The 17-piece band has a full, ripe sound with the leader and Alexander on tenor sax as the main soloists. Party Time, by Lee Morgan, is a joyous romp, full blooded with everybody in the ranks having a great time. Matador is by Grant Green and forms, along with Bags And Brown and Blues For Jed an almost all-blues programme. The ballad performance here is Lionel Richie’s Still but you get the impression they are all itching to get back to swinging hard.

This big band is laden with talent, and it is a pity that top soloists such as trumpeter John Faddis, Steve Davis on trombone, tenor man Scott Robinson and alto-sax man Steve Wilson did not get much, if any solo space. Those that do solo though, go with a bang.

Michael Tucker - 08 November 2021
Four years after their well-received Transparent Water on Ota Records/World Village here is the second – and equally superb – album from the Cuban Sosa and the Senegalese Keita,...