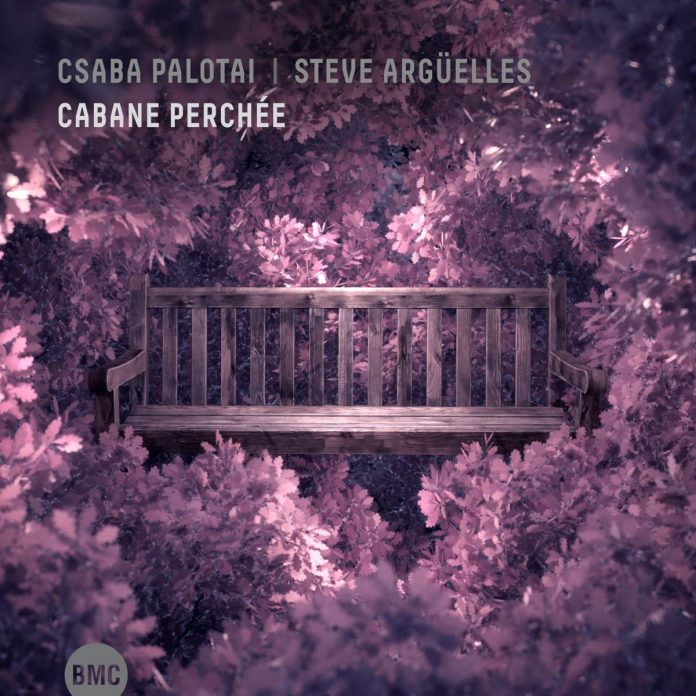 After seeing quite a lot of Steve Argüelles when I was finding my way into jazz in the 80s, I’ve somehow lost tabs on his career. Loose Tubes founder member and erstwhile collaborator with John Taylor, Django Bates and Billy Jenkins, Argüelles always had a knack for recycling found fragments of into something fresh and unexpected. Based in Paris for many years, the elder brother of saxophonist Julian is now also a label boss (Plush), an in-demand producer, and an occasional club DJ.

Paris is where Argüelles first encountered Hungarian guitarist Csaba Palotaï, a resident of the city since the mid-90s. They appeared together with saxophonist Rèmi Sciuto on the 2019 BMC release Antiquity, but with Cabane Perchée (“tree house”) they set out to try something a little different.

All but three pieces are adaptations of Bartók’s Mikrokosmos, and in an unexpected musical twist the duo’s improvisations are peppered with the earthier tones of American original Moondog (Louis Thomas Hardin). Palotaï plays acoustic guitar throughout, and with Argüelles using a restricted range of small percussion instruments, there’s a simplicity redolent of street music. If you were to stumble across this duo busking on the concourse of the Centre Georges Pompidou you probably wouldn’t be too surprised, but I’m certain you’d be overtaken by the urge to linger.

Argüelles’ use of prepared guitar introduces warm and vaguely North African hues, just one of a variety of folk inflections which are scattered across the piece. Palotaï’s relaxed virtuosity is a complete joy throughout, and although the album is relatively brief the duo’s constant churn of ideas prevents any flat spots. The steadily rising polyrhythmic eddies of Bulgarian Rhythm I and Hommage are nothing short of hypnotic, and a world of hidden detail is cleverly revealed as the riff-based minimalism of Phosphore and Fair Ground unfold. The rocking La Cabane has great immediacy and impact, while Argüelles’ spare gongs and cymbals on the enigmatic Oriental make the album’s shortest track one of its most memorable.

All told Cabane Perchée is a veritable riot of infectious rhythm and exotic colour, and it’s a wonderful way to reconnect with the music of one of the UK’s most frequently overlooked talents.