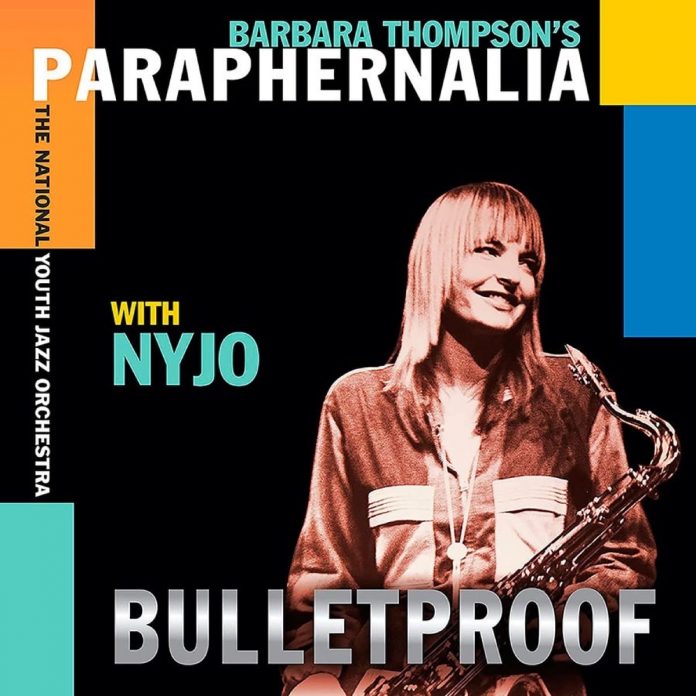 The last 12 months have been an extremely busy time for Barbara Thompson. Her brilliant and highly readable autobiography Journey To A Destination Unknown was published in 2020 by Jazz In Britain to rave reviews. A little later that year a mammoth 14-CD box-set retrospective Barbara Thompson Live At The BBC was released (Repertoire, 2020) again, to justifiable critical acclaim.

Now she has produced a new album with her band Paraphernalia as a follow-up to The Last Fandango (Temple Music, 2015). For the first time, due to her continuing struggle with Parkinson’s disease, Thompson was precluded from playing on this record. Nevertheless, she was very much involved in it as sole composer and executive producer. She also wrote the comprehensive liner notes.

Violinist Billy Thompson (no relation) is the only remaining active front-line member of Paraphernalia and is frequently heard throughout, his classical training standing him in good stead for numbers such as the complex title track but his jazz chops are there too, dispensing frequent fiery examples of his glissando-rich, bluesy style.

On the sumptuous In Memory, written for Thompson’s late father, her daughter Ana Gracey Hiseman’s lustrous vocals are super-charged with spine-tingling emotion. It was originally a tune with words Thompson took from the poem Ugly Sister by Philip Larkin, but her daughter rewrote the tune’s lyrics to reflect the loss of her father, Jon Hiseman, her vocal delivery all the more poignant for that. Thompson’s daughter also sings on Safe As Houses, which Thompson wrote for Colosseum’s album Time On Our Side (Ruf Records, 2014) when Thompson replaced the late Dick Heckstall-Smith on saxophone.

Blues For Adolph Sax carries with it special significance, referring to the occasion when in 1973 Thompson was invited to appear on a Belgian television programme to mark 100 years of the saxophone. This is chronologically rather odd since the sax appeared several decades earlier than 1873. As the only female on the show and, astonishingly, the only jazz musician, she was asked to write the session’s “outro”, which she named after this most important musical inventor. This too-rarely heard composition was often played by Paraphernalia as an encore. The piece has only appeared once before on record on The Don Rendell Five (featuring Barbara Thompson) album Just Music (Spotlite, 1975). However, the composition may be familiar to older jazz lovers as it served as the theme tune to BBC Radio 3’s Jazz Record Requests in the 1970s.

A couple of the numbers, Ode To Sapho and In Memory, have been previously recorded by the (biggish) band of leaders the United Jazz and Rock Ensemble, of which Thompson and Hiseman were founder members. Such was Thompson’s status in the UJRE that they released an album of her compositions Plays Barbara Thompson (Mood, 2002).

All the tunes presented here have been heard on earlier recordings or live performances and all are Thompson favourites. The members of Paraphernalia are supported by the stellar services of the National Youth Jazz Orchestra, a big band of world-class players. Special mention must be given to Tom Ridout who took the lion’s share of the sax solos along with Tom Smith. Drummer Max Mills had the unenviable task of filling the gap left by the untimely death of Thompson’s husband Jon Hiseman, who passed away in 2018 and to whom this album is dedicated.

Hiseman was one of Paraphernalia’s longest-serving members and leader of the internationally acclaimed jazz-rock band Colosseum. This album is a joyous testament to the major contribution that both Thompson and Hiseman have made to the UK and international music scene.

Dinosaur: To The Earth

Gareth Thomas - 03 July 2020
The third album by British jazz quartet Dinosaur feels a bit like a change in direction for the group; in contrast to the turbulent synth-driven grooves of Wonder Trail...

Roger Farbey - 22 July 2022
It’s axiomatic to aver that Barbara Thompson, who passed away 9 July 2022, was the greatest female jazz musician that the UK has produced. However, although that is undoubtedly...