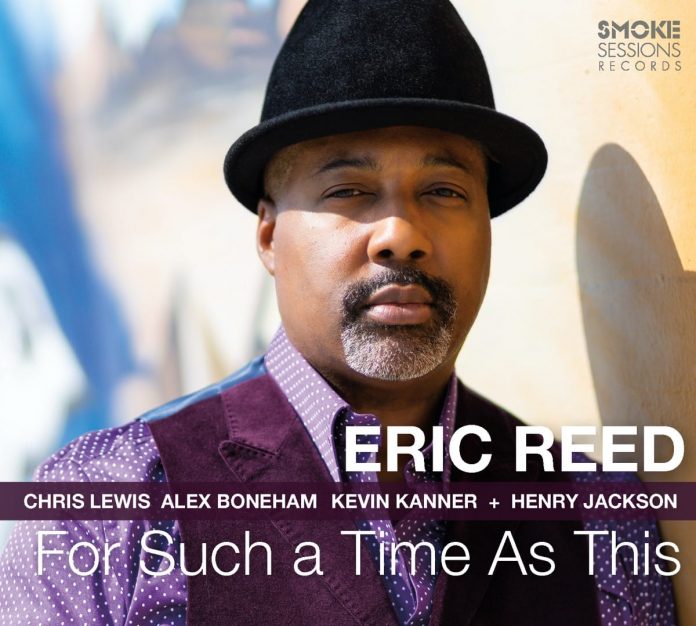 Eric Reed is an extremely accomplished American jazz pianist, who, through his multiple leader albums, continuously shows his aptitude for the piano. His latest album, For Such A Time As This, is a musical world shaped by the ongoing difficulties faced in society. The hardship of the pandemic, racial injustice, continuous racism – all make for a deeply personal album.

Back in June 2020, COVID-19 resulted in a lockdown in Los Angeles. Reed used this opportunity to record the album and began assembling an exceptionally talented quartet. By the end of June, Reed, drummer Kevin Kanner, bassist Alex Boneham and saxophonist Chris Lewis spent two days recording soulful music, all live.

Although lockdown precluded an audience – a more usual set up for the pianist and his bands – Reed used the differing circumstances to the music’s advantage. This is especially notable in the five solo pieces for piano: Paradox Peace, Stella By Starlight, Come Sunday, We Shall Overcome and Hymn Of Faith. The intimacy of just Reed and his piano allows for heartfelt and meaningful deliveries of rich pieces.

In keeping with Reed’s love for gospel, his childhood idol Henry Jackson features on the emotional track Make Me Better, which sends out messages of strength and power to listeners.

The upbeat numbers in For Such A Time As This show Reed’s virtuosic playing through dextrous solos, whilst simultaneously allowing the other members of the quartet to demonstrate their skill; Western Rebellion is one of many tracks that reveal Lewis’s proficiency on the saxophone. Thelonigus provides an artistic space in which Kanner can explore various rhythmic paths, whilst Reed skilfully experiments with motifs by the masters Thelonious Monk and Charles Mingus.

For Such A Time As This is an intelligent musical outlet in which listeners are not only encouraged to reflect on the struggles faced in society, but also to remember music’s powers in surmounting these struggles.