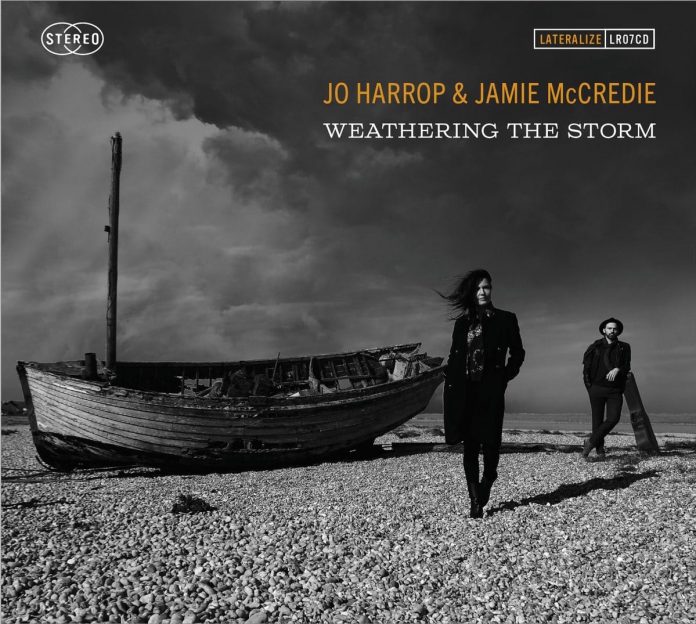 I first heard this back in May of this year, soon after it was released, and I’ve been listening to it, on and off, ever since. There’s a calm certainty about it which is rare nowadays.

Jo Harrop has a warm and intimate voice, with a gorgeous glow on the lower notes. She clearly loves these songs and, with the lightest of rhythmic or melodic variation, lets each one tell its own story. Jamie McCredie’s accompaniment is quite lean, but with great finesse. I really can’t think of another guitarist who sounds anything like him. His solos here reveal a sparkling technique and an unusual turn of phrase.

Together they have evolved their own duet style, as distinctive in its way as Ella with Joe Pass or Julie London with Barney Kessel, a style that includes enough space to let the music settle in your mind.

The songs are all ballads of one kind or another, ranging from Vincent Youmans to Randy Newman – a stretch of about 80 years at a guess – and the list includes some interesting choices. There’s Early Autumn, which started out as a few bars in the fourth movement of Ralph Burns’s Summer Sequence, later turned into a showpiece for a very young Stan Getz, before finally becoming a song with a charming lyric by Johnny Mercer. There’s also the mysterious but spellbinding Take It With Me, by Tom Waits and Kathleen Brennan (alias Mrs Waits).

Altogether it’s a canny mixture of familiar and surprising. The surprises gradually become familiar and the familiar ones are so good (My Foolish Heart, In The Wee Small Hours) that you never get tired of them.

Discography
My Foolish Heart; I Fall In Love Too Easily; Tenderly; Take It With Me; Guilty; More Than You Know; You Must Believe In Spring; Charade; Early Autumn; In The Wee Small Hours; *If (46.05)
Harrop (v); Jamie McCredie (g); *add Jihad Darwish (b). Recording place and dates not given, c. 2020.
Lateralize LR07CD

Elliot Marlow-Stevens - 04 March 2020
UK jazz outfit Resolution 88 release their latest studio album, Revolutions, combining a passion for the classic jazz-funk of the 70s with the ultra modern. Having supported the likes...