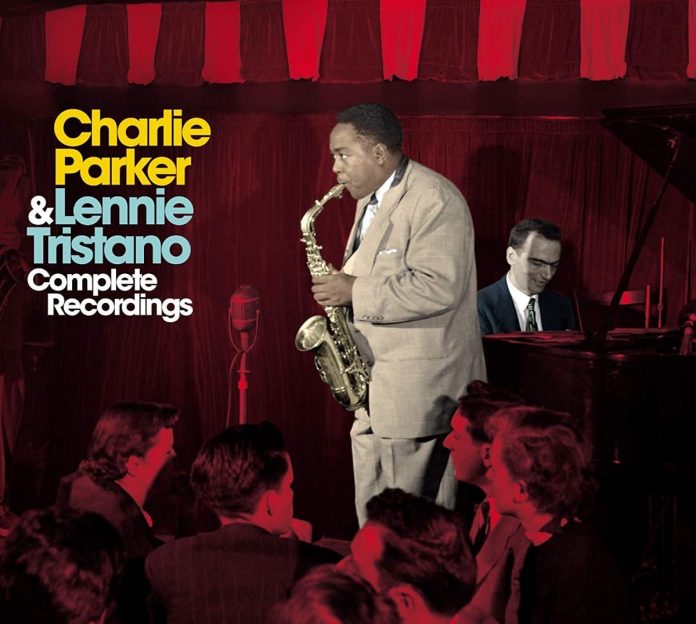 This CD collects all the music recorded by Parker and Tristano from three sessions put together by US Radio from their Mutual Network station in NYC. In addition, there is a duet by Bird and Tristano made at the pianist’s home in 1951. The two tracks are fascinating for the way that Tristano’s unique chords seem designed to set Parker off in different directions, often successfully.

Parker is just as personal and inventive as ever but sounds occasionally as though he is improvising in the cool manner of his pianist friend. Kenny Clarke was around but without a drum kit, so he played brushes on a telephone directory, I kid you not! It is the only example on record of Parker improvising on I Can’t Believe.

The next four selections feature the couple playing in an all -star group with a band headed by critic Barry Ulanov called The All-Star Metronome Jazzmen. A further group is also featured under the same heading which features Fats Navarro and Allan Eager along with Billy Bauer on guitar and Buddy Rich at the drums. On these selections Parker and Navarro are much more into their usual bop style playing glowing solos and not unduly influenced by Tristano’s chords. That said, it must be added that Tristano fits in very well, playing in a more straightahead manner in the large band.

Everybody gets a solo spot with Bird, Gillespie and Navarro all on great form. These recordings were made for a competition between modern and traditional musicians and recorded by USA Treasury Radio. Navarro’s feature, Fats Flats, a variation of Hot House, is a terrific solo emphasising his great bop chops allied to a lyrical style like no other. Parker sails through Donna Lee with a fresh variation on the theme and some impressive soloing. And how about Tiger Rag played in bopper’s language?

The last session is from Metronome’s poll-winners band with the familiar and much reissued Overtime and Victory Ball. There is some first-rate solo work and ensemble playing on offer here. The radio broadcast sound is surprisingly good for such early recordings. Parker and Tristano were quite different in their approaches to modern improvisation but these sides prove that they could and did work well together when the occasion arose.

Barry Witherden - 22 February 2021
Merzbow will probably be more familiar to fans of experimental avant-rock than jazz audiences. It has passed through various phases (mainly noise-based but at one stage essaying a bit...