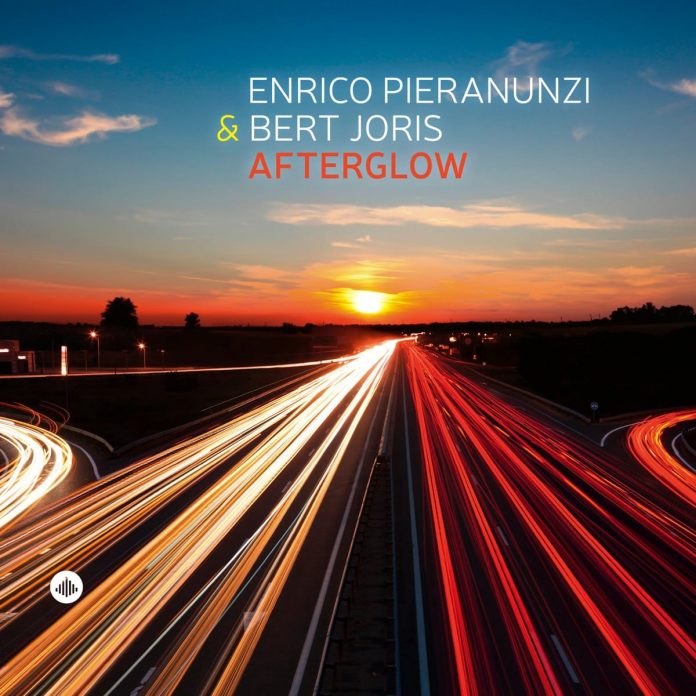 Enrico Pieranunzi, born in Rome in 1949, is one of the leading contemporary jazz pianists, not just in Italy but internationally. He’s recorded more than 70 albums under his own name, and collaborated with such leading figures as Chet Baker, Lee Konitz, Paul Motian and Charlie Haden.

One of his outstanding albums is the 2010 recording Live At The Village Vanguard with Marc Johnson and Paul Motian. Pieranunzi is also a fertile composer, especially in jazz and film. His lyrical, catchy melodies have been featured in soundtracks for several movies, and he was one of Ennio Morricone’s regular session musicians – he’s released homage albums to both Morricone and Fellini.

On Afterglow, Pieranunzi is featured with Belgian trumpeter, composer and arranger Bert Joris, in one of his most rewarding recent albums. The pair collaborated in the context of the Brussels Jazz Orchestra on The Music Of Enrico Pieranunzi (2015) – I was lucky to catch them live at Bergamo Jazz – and the aptly-named Afterglow is a sequel. The combination of piano and trumpet, without a rhythm section, is quite rare in jazz, but very gratifying, as this album shows. The duo is highly simpatico, and Joris provides an ideal complement to Pieranunzi’s lyrical style.

Most of the pieces were written by Pieranunzi. There are also two by Joris – and two by both, which I assume are free improvisations. The title track is one of Pieranunzi’s gorgeously affecting minor-key mid to uptempo compositions, reminiscent of some of the compositions on his beautiful solo album, Parisian Portraits. His Five Plus Five is a freewheeling blues, while the plangent Anne April Sang is sumptuous and majestic. The brief Freelude is – I’d guess – a free improvisation. Also in free tempo, but developing into a groove, is the very moving How Could We Forget, whose theme opens in an echo of Thelonious Monk’s Round Midnight. A really delightful release.

Orrin Evans and the Captain Black Big Band: The Intangible Between