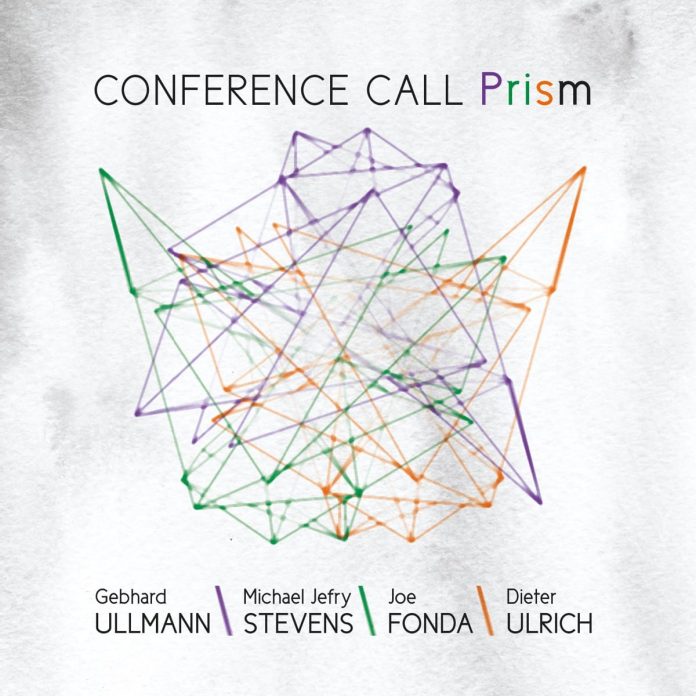 The self-coined in-joke about this international quartet is reflected in its name. With two members of the group hailing from the USA, one from Germany and one from Switzerland, they literally require a “conference call” whenever they need to communicate with one another. The band has been together for over 20 years and this is their tenth recording, their previous two What About….? (Not Two Records, 2010) and Seven (Live @ Firehouse 12) (Not Two Records, 2013) being double CDs.

They’ve also benefitted from a variety of drummers over the years. Matt Wilson was the group’s first and played on their debut album Final Answer (Soul Note, 2002). But their second drummer, who played on the group’s second European tour, was the legendary firebrand percussionist Han Bennink. He was succeeded by George Schuller who holds the record as the longest-serving drummer with the quartet. However, for the first time, Swiss drummer Dieter Ulrich joins them for this CD.

There’s an eclectic selection of tunes on the album, showcasing a variety of styles and influences. The first two tracks are unapologetically free. The ensuing third number, Listen To Dr. Cornell West, is a lengthy centrepiece which doesn’t really coalesce until halfway through when it is satisfyingly consolidated by a tenor-led melody over a bass ostinato combined with a regular rhythm and a sense of a more conventional cohesiveness whilst still maintaining an exploratory feel.

Gebhard Ullman swaps his tenor for bass clarinet on Variations On A Master Plan (Part 2) and thereby imparts a feeling of plangency, whereas the bluesy Sal’s Song is imbued with rich tenor-driven expressiveness. Starting slowly, it accelerates to a swing tempo simultaneously building the excitement, rounding off with Ulrich’s brief but florid solo.

Bassist Joe Fonda’s divergent The Bee sees Ullman back on bass clarinet, often taking the instrument to the very limits of its register. The closer, Ullman’s Zeit Lupe, is almost balladic in pace, but by virtue of this affords the quartet space in which to utilise the silences, facilitating a reflective collective conversation or musical “conference call” if you will.

Nic Jones - 14 August 2019
I’d previously only come across Bohanon’s work with a Chico Hamilton quintet that came as close as that drummer-leader ever got to hard bop, at least on record. Bohanon...