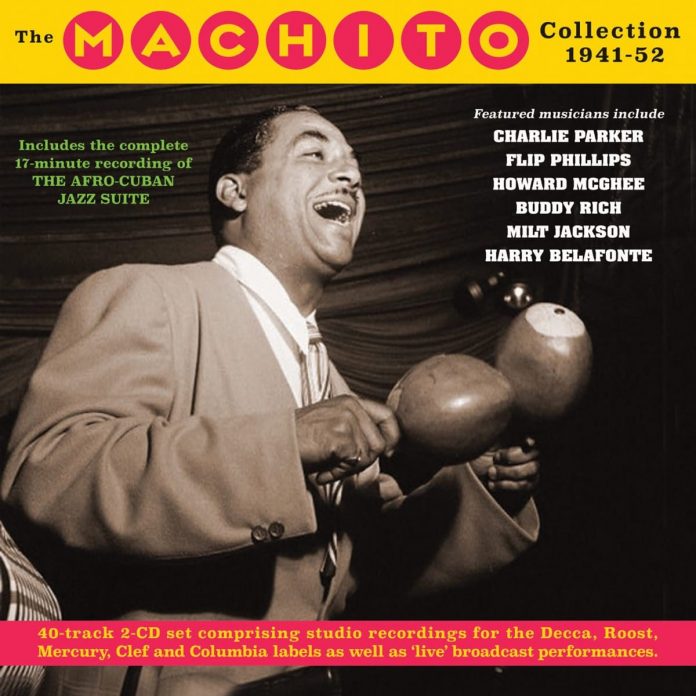 Machito and I didn’t go looking for each other, and so we’ve not collided before. I didn’t know much about Machito before this album arrived. Now I’m overwhelmed and I’ll probably have tommy-gun rhythms, rattling brass and staccato piano keeping me spinning in bed through the small hours, but hopefully only for a few weeks.

These 40 tracks probably make up the best collection of Machito’s work that there is, and it will certainly suffice for me in my twilight years, which are probably foreshortened by this experience.

Not a lot of it is subtle and any melody has to give best to the rattlers and bangers, with resolutions being replaced by hard-paved roads to the abrupt endings. In one word, relentless.

I suppose that the excellent musicians, with ex-Calloway Mario Bauza as musical director and trumpeter and successful visits from Flip Phillips, Buddy Rich, Charlie Parker, Brew Moore and MIlt Jackson, must have enjoyed all this (or else the money was exceptional) for they all (not the visitors of course) stayed with Francesco Raul Gutierrez Grillo, to use the boss’s given name, for a long time.

Parker flies on Chico O’Farrill’s splendid Afro-Cuban Jazz Suite, and is it my imagination that the thundering horde lays off out of respect? Milt Jackson makes a brief appearance. Flip and Parker join the band for a riotous Flying Home. Note that the 17-minute Afro Cuban Jazz Suite also appears on South Of The Border (Bird’s Nest 244106) under Parker’s name.

Fred Grand - 10 November 2019
Born in Madrid in 1993 and now a fixture of the thriving Catalan jazz scene in Barcelona, Torres clearly has a strong fascination with the music of Paul and...