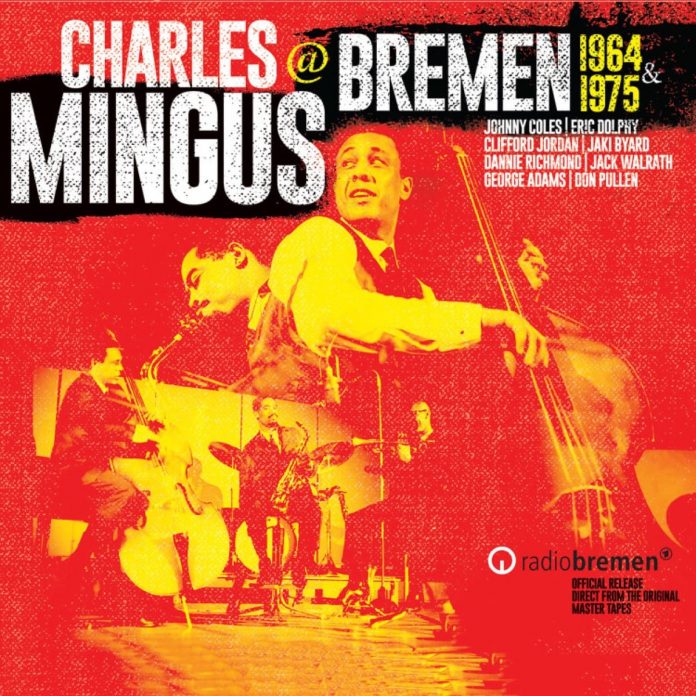 The four CDs in this tri-fold digipack are professional recordings of two concerts performed by Mingus in Bremen when he toured Europe in 1964 and 1975. They are the first to be mastered from Radio Bremen’s original source tapes.

The 1964 concert at Radio Bremen’s Studio F was the first time Mingus had performed in Germany. The band he brought with him was regarded by many as his best and had Johnny Coles on trumpet, Eric Dolphy on reeds and flute, Clifford Jordan on tenor saxophone, Jaki Byard on piano and Dannie Richmond on drums. It was the last time that the much under-ratedColes played with them. On the following day he was taken ill and had to leave the tour.

The audience in 1964 was taken aback by the fervent and unrestrained nature of this brash “new jazz”. The concert opens with Hope So Eric, a blues and hard-bop mix written by Mingus when Dolphy said he wouldn’t be returning with him after the tour. Dolphy stayed on in Europe and died a few weeks later from a diabetic coma. A raucous Fables Of Faubus follows. This is the longest track at over 33 minutes, allowing each band member ample latitude to solo at will. It’s a fast-paced and manic affair – a lot different to the original on Mingus Ah Um. Next is Jaki Byard’supbeat Piano Solo. Alternatively named ATFW, it was written in homage to Art Tatum and Fats Waller. Mingus’s own pizzicato bass solo, Sophisticated Lady, is an almost four-minute paean to Ellington. It leads straight into the perambulating Parkeriana, a tribute to another of his heroes, Charlie Parker, with renderings of Ornithology and Monk’s 52nd Street Theme. Mingus’s musing on racism, Meditation On Integration, closes the set with Dannie Richmond in full flow on drums, sizzling trumpet from Coles, arco bass soloing from Mingus and Dolphy on turbulent flute and bass clarinet.

When Mingus returned to Bremen 11 years later, this time to the Post Aula auditorium, his quintet played to a more enthusiastic audience. It was virtually a new band with Jack Walrath on trumpet, George Adams tenor sax, Don Pullen piano and Dannie Richmond again on drums. Most of the numbers they played were to be released later in the year on the Atlantic LPs Changes One and Changes Two.

The 1975 performance opens with Sue’s Changes, written by Mingus for his wife. It’s an unsettling piece with differing tempos and dazzling solos from Walrath, Adams and Pullen. The Cuban-style dance number, For Harry Carney, is Sy Johnson’s tribute to Ellington’s baritone saxophonist and close friend who died the previous year. Free Cell Block F, ’Tis Nazi USA protests against the poor prison conditions of black Americans in the southern states. Black Bat and Poles has incandescent cries from Mingus and Walrath. It was composed by the latter and originally named Rats And Moles until Mingus decided it needed a more sinister title. When read in the context of implements with which to beat subjects, the new title has an altogether grimmer connotation. After a crisper version of Faubus than that in 1964, the next track, Duke Ellington’s Sound Of Love, is magnificently temperamental with expressive sax and piano soloing. There’s a brief and riotous Cherokee and then Remember Rockefeller At Attica which is surprisingly cheerful given its portrayal of the New York governor’s brutal retaking of the prison from its insurrectionist inmates in 1971. The splendidly spirited Devil Blues featuring raunchy tenor soloing and raw vocals from Adams closes the concert.

The sound quality of the 1964 concert is fair to good and the 1975 gig is even better, at very good to excellent. Both concerts give us front-row seats at sets from two of the top line-ups of the time and show how one of the most important bassists and leaders in jazz was consistently operating at the height of his powers across more than a decade of live performance.