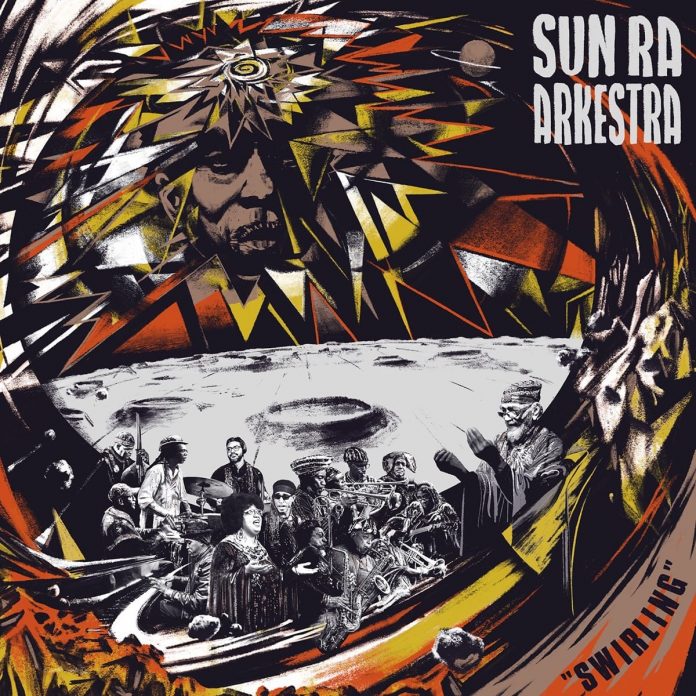 This album is described as being the Arkestra’s first studio album in over 20 years, although exactly when it was recorded is not entirely clear – for example Seductive Fantasy is “a shared re-recording of 1979” and a couple of the musicians have unfortunately since departed. However, it is under the direction of Marshall Allen, Ra’s long-time associate who has been at the bridge of the spaceship since 1993, when Ra left the planet for outer galaxies. Many might have seen the band perform regularly in recent years at various places including Café Oto in London, and like this writer, not been disappointed.

It is of course very much in the image of the great man, a mixture of atonal, expressive solos backed by dense arrangements. That at times things are loose to the point of falling apart is of little consequence or importance – infectious spirit is what matters. The Arkestra creates an ocean of sound, at times stormy and veering into cacophony and chaos, but pulled back to maintain order and inject stability into the turmoil; Tara Middleton’s vocals also serve as a calming influence.

The title track, Swirling, is a composition by Allen himself, and it reflects him sharing Ra’s respect and admiration for the swing bands. Farid Barron’s piano intro for the first few bars ushers in a formal big band arrangement, soon threatening to be dismantled, by pianist, soloists and assembled entourage but, with the addition of Middleton’s contralto voice, it falls into a perfectly straight big band number, although with a wonderfully all-encompassing piano contribution. Sunology is also linked directly to the swing bands, this time a broad brush of Ellingtonia, but once more blurring styles and eras – the occasional bop line thrown in.

Darkness, resurrected from the Sun Ra archives by Allen, has Danny Ray Thompson’s baritone laying down a deep delicious sound statement over which the band ensemble play the melody (for want of a better word). Solos then replace ensemble, which joins in as support. Rocket No.9 shows a slightly Monkish influence, topped by raplike vocals, unearthly sounds and fragmented solos, whilst the wailing alto heard on Infinity is, I assume, the leader himself. Allen also plays EVI on occasion, creating otherworldly effects. Essentially a synthesizer for a trumpet, it generates sounds akin to those produced when Ra used a Moog in the late 60s.

The LP has one extra track, Queer Notions, a Coleman Hawkins number, which despite the raggedness, still maintains its sense of swing. Ra’s connections with Hawkins go back to 1948 when they performed briefly together in a trio. The digital version also has Unmask The Batman and Space Loneliness, the latter a raunchy blues, introduced by Tyler Mitchell’s bass, with more of Barron’s piano virtuosity, some hard-edged and rasping horns and Middleton’s strident vocals.

Sun Ra always composed and included tributes to his swing era inspirations, and Marshall Allen follows in this tradition, the Arkestra adding mesmeric horns and blurting, forceful solos. A must for space cadets. Cosmic!

Brian Morton - 14 April 2020
It’s not very often that you hear making a record likened to the writing of a novel. Usually painting or sculpture or sometimes dance (or in the case of...