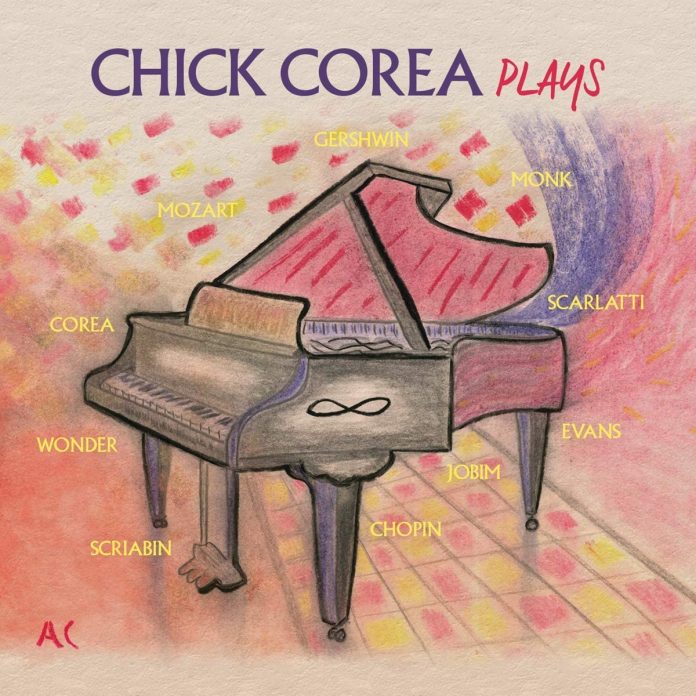 When I saw Corea at Ronnie Scott’s last year, it struck me that one of the highlights of that gig was his outstanding solo piano playing on introductions to tunes, where he sounded like an even better pianist than previously. That extremely high quality of solo playing continues here on this new solo piano release, where, according to the press release, legendary pianist Chick Corea explores the lineage of great composers from Mozart to Monk, Jobim to Stevie Wonder, to Chick Corea.

I’d have thought it was up to others to judge whether or not one’s work is great or not. Corea decides for himself here, but maybe he’s right, as he’s one of the most distinctive of the great jazz pianist/composers. The scope of musical material covered in these two CDs (or three LPs) is sizeable, including (in addition to those mentioned above) Gershwin, Scarlatti, Chopin, Scriabin and Evans, and to my mind they seem like two quite different and unconnected CDs.

CD1 tentatively explores comparisons between interpretations of tunes by composers from seemingly different areas of music (seeking to connect, e.g., jazz and Western classical, and jazz and Latin music). Chick introduces the various pairs/groups of tracks to the audience, putting Mozart and Gershwin side by side, and the same with Evans and Jobim, and he also does what several other contemporary jazz pianists (e.g., Pieranunzi and Mehldau) have done in recent years, which is to juxtapose their interpretation of a Western classical work with an improvised version.

Corea’s playing here is excellent, as you might expect, but there’s a feeling of having been in this territory a number of times before with other pianists, to fairly similar effect. Corea doesn’t really explain the connection between the paired pieces to the audience, but rather he suggests that they sound good side by side, letting the audience decide the rest. This first CD ends with a spirited version of Blue Monk, before we reach the quite different second CD.

CD2 explores Corea’s Children’s Songs and also engages more with the audience by way of improvised musical portraits (of audience members) and duets with individual audience members. The duet players happen to be professionals – the excellent contemporary jazz pianist Yaron Herman and classical pianist Charles Heisser, so the overall standard of playing doesn’t drop as a result, but it was Corea that the audience came to hear at these recent concerts.

We could easily have been looking at two separate CD releases here, which is what makes it in some ways a difficult release to digest. The two CDs have their own identities, and don’t really sound especially great side by side, unlike Corea’s well-chosen paired/grouped tracks on CD1.

John Adcock - 23 September 2020
Italian guitarist and composer Rocco Zifarelli worked alongside Ennio Morricone for over 20 years, recording with him on several award winning film scores and touring the world. This album is...