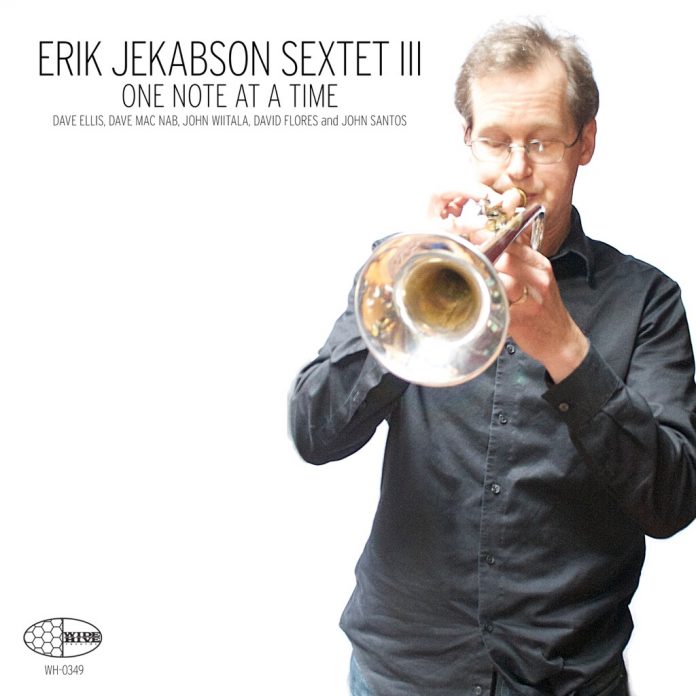 This album is the eighth recorded under Jekabson’s own name and is the follow-up to the eponymous Erik Jekabson Sextet (Wide Hive Records, 2018). His debut album Intersection was recorded in New York in 2002 and released on the Fresh Sound New Talent label.

Jekabson has surrounded himself with some excellent sidemen and he himself is no mean trumpeter, boasting the ability to play with both panache and sensitivity. The calibre of the personnel can be detected instantly on the lively opening number Days Of Haze, which evinces a Brecker Brothers feel. The soloing too is immediately impressive, commencing with Dave Ellis’s lithe soprano, followed by Jekabson on trumpet and a fairly scorching solo by Dave McNab on guitar.

The slower-paced Dusk is ruminative and here Jekabson turns in a thoughtful, ruminative solo.

There’s plenty of stylistic variety here as in the breezy Latinesque Full House or by stark contrast the mournful The Growing Place. But there’s also a bit of retrospective referencing here in the shape of tunes like the bluesy groove of Brother Todd, the likes of which could easily have been heard in the early 1970s. However, it’s still very finely executed and peppered with engaging solos and a catchy ensemble head.

The outlier on this album is the elegiac title track in which spoken-word vocals are provided by Avotcja, reciting her arresting and engaging poem over a lugubrious score, augmented by a two-violin string section. But it’s certainly a break from the other more conventional compositions.

As for the remaining numbers, as already stated, there’s a tendency to oscillate between unequivocally upbeat numbers such as Shaker Funk and sombre moodiness as heard on the closer When You Went Away. But there’s nothing particularly wrong with this approach and the consistently high level of musicianship more than compensates for the emotional roller coaster of selection placement.

Click here to buy Erik Jekabson Sextet III: One Note At A Time

Brian Morton - 11 March 2019
A friend mentioned recently how much he liked Joe Farrell’s work with Chick Corea but then took me aback somewhat by expressing regret that Farrell hadn’t made any records...