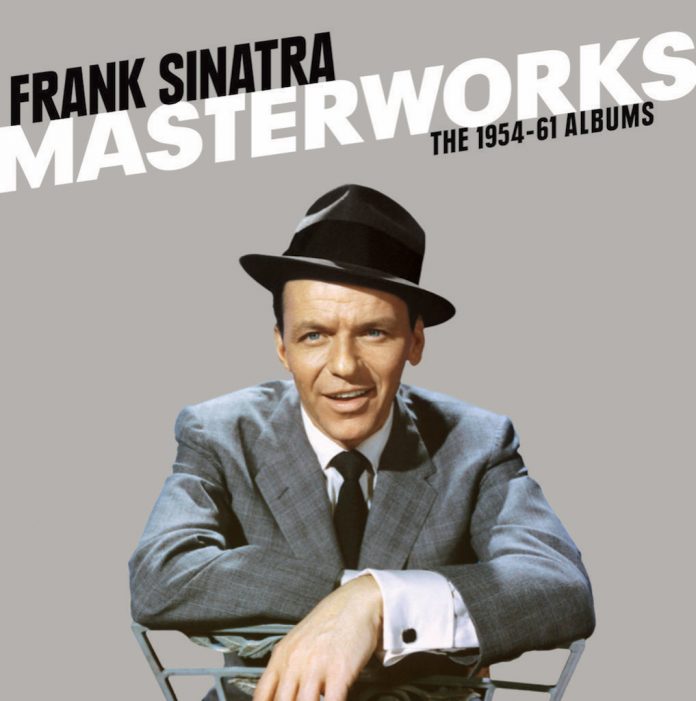 There’s a school of thought that says you can’t have too much Sinatra and I’m the Head Boy so when this Masterworks flew over the transom I was in hawg heaven. To dispense with the stats; there are nine CDs containing 15 complete albums, 12 on Capitol and three on Reprise plus 43 bonus tracks making a grand total of 227 numbers at an average three minutes running time – that’s over three and a half hours of easy listening. Of course in that time you could always watch Gone With The Wind. Each to his own, I know what I’d rather do.

That’s not to say I’m not prepared to let out a mild squawk about some of the selections; for example at Capitol he worked with three principle arranger/conductors – Nelson Riddle, Billy May, and Gordon Jenkins – and rightly or wrongly over the years Riddle has had the lion’s share of ink whenever Sinatra is mentioned. Both Riddle and May are represented liberally here but of Jenkins there is no sign. I’d cheerfully lose Look To Your Heart and Sinatra’s Swingin’ Session in favour of Where Are You and September Of My Years.

But what about the stuff that is here? Songs For Young Lovers, Sinatra’s first real album, remains green in my memory. My introduction to the album was brokered indirectly by two DJs working out of Frankfurt and Munich. Sergeant Don Cosgrove and Private Nick Clooney used to beguile the witching hours of my youth playing records on AFN. Night after night one or the other would play gorgeous tracks – Little Girl Blue, Violets For Your Furs, Like Someone In Love – without mentioning they were part of an album. Conventional record shops couldn’t help and finally, in desperation, I tried a shop that specialised in selling grand pianos and boasted a very small record section. Voilà. The salesperson produced a 10” album which, as I discovered when I got home, contained eight pieces of Heavy Duty enchantment.

I’ve just played it again and the magic is still there. Then came In The Wee Small Hours Of The Morning, released in the UK not only as two 10” albums, Part 1 and Part 2, but also as four EPs. The only thing that could top that was the definitive swing album and that it duly did in the shape of Songs For Swingin’ Lovers. Here is my only reservation; they recorded 16 tracks for SFSL but only issued 15. Some years later Alan Dell produced a vinyl album, Sinatra Rarities, with things like The Sea Song, The Man With The Golden Arm, etc, and he included that elusive track, Memories Of You. This latest reissue seemed an ideal opportunity to restore it to the album but it is an opportunity missed. Apart from that this is a fine collection so whatever your pleasure, I Get A Kick Out Of You, Deep In A Dream, I’ve Got You Under My Skin, there’s an excellent chance you’ll find it here, truly a box of tricks.

Discography
Swing Easy; Songs For Young Lovers; In The Wee Small Hours; Songs For Swingin’ Lovers; Look To Your Heart; A Swingin’ Affair; Come Fly With Me; Only The Lonely; Come Dance With Me; Nice ‘n’ Easy; Sinatra’s Swingin’ Session; Come Swing With Me; Ring A Ding Ding; Swing Along With Me; I Remember Tommy (518.08)
Frank Sinatra (v) and various orchestras.
Masterworks 704

Barry Witherden - 19 May 2022
Archer says he has wanted to make a trio recording for many years but could not decide who to recruit for it until he heard Bardon’s work on The...