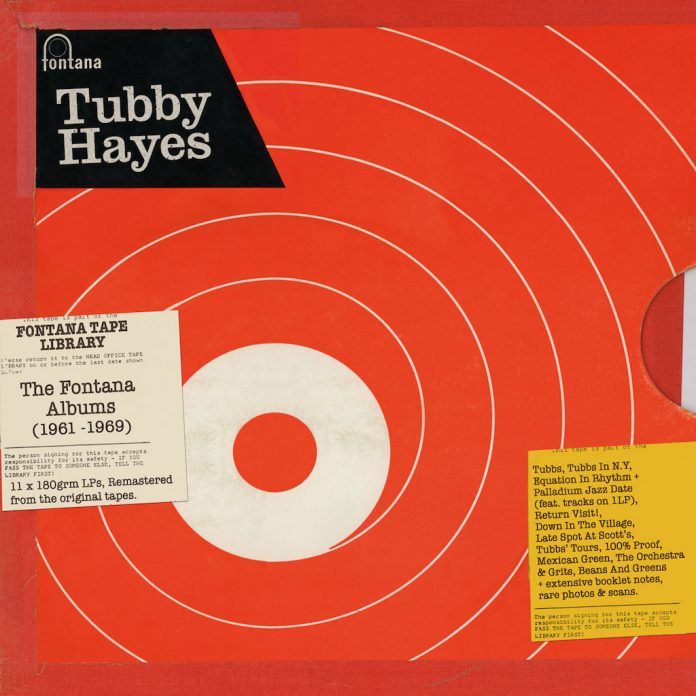 Having covered deluxe box sets by US masters, Coltrane, Rollins, Bill Evans and Thelonious Monk over the past two years, I was particularly interested to receive this comprehensive 11-LP box featuring the first UK jazz giant of international status, Tubby Hayes. Nobody deserves this elaborate remastering and repackaging more than he. Fontana have been very thorough and nobody needs to feel left out as they have made available a two-CD set of the unissued album with all the alternates, a single LP or CD of Hayes’ only unissued set, a 13-CD set of all the albums with alternates and extra tracks, and this sterling set of the original vinyl records. Many enthusiasts of a certain age will want this collection of exact replica LPs, looking just as they did on first issue and many new fans will be interested. And on the subject of enthusiasts of a certain age, as Benny Green observes in his sleeve note of the first record, Tubbs, that few people were interested in British modern jazz and “critics won’t seek it out and fans won’t pay for it so naturally record companies are wary about recording it”. He was quite right and many jazz folks, myself included, rushed out eagerly to buy the latest Coltrane on Impulse, Rollins on RCA or Cannonball on Riverside seemingly unaware that we had a major soloist on our own doorstep.

Jazz Journal readers get 20% off this set for a limited period – click here and use TUBBY20 code at checkout.

With Tubbs, LP1, Hayes was, surprisingly, given free rein by Fontana to play what he wanted, any way he wanted and with any musicians he wanted. He took full advantage, using his current quartet on four tracks, a brass ensemble on three and a reed section on two. On The Late One, featuring the quartet (the Jazz Couriers minus Ronnie Scott), Tubby blasts off at 100mph, showing astonishing virtuosity and dragging his rhythm section screaming behind him. To their credit they caught up and stayed up and helped Hayes fashion a gorgeous ballad reading on The Folks Who Live On The Hill, on vibes. Tubby meant to go on where he left off at the Tempo label, and his first album with the new company is a scorcher. The next LP featured Tubby with bongo maestro Jack Costanzo plus three tracks with Tubby’s rhythm section live at the London Palladium. The Latin-based Costanzo tracks have belting Tubby but it is mostly a tenor and rhythm exercise with impressive playing by the bongo man and drummer Phil Seamen on fine form. There is very good bop blowing on the Palladium disc, if it is a little short on the explosive excitement generated by Tubbs.

The next two LPs have Tubby demonstrating his international status as he more than holds his own in New York with some top US musicians including Horace Parlan and master bassist George Duvivier on Tubbs In New York. This was an exchange deal with the US, with Zoot Sims going the other way to play at Scott’s in London. Just listen to Tubby blow the blues on A Pint Of Bitter. On the uptempo pieces he really appears to be dragging the likes of Parlan and Clark Terry along on his coat-tails. He has a slightly harder time the next year on the album Return Visit, where he is matched by the considerable talents of Roland Kirk, James Moody and Walter Bishop Jr. He is certainly not outplayed though and cruises happily along on the smooth rhythm provided by Sam Jones and Louis Hayes.

Back in London Tubby disbanded his long-running quartet and with unerring facility for choosing the right partners headed for Ronnie Scott’s Club to record two Fontana albums over two nights. These LPs bring back memories for me of nights in a dark, musty, crowded cellar in Gerrard Street. Down In The Village has a strong performance by all on the title track, including some blazing vibes, and a softer ballad mode on But Beautiful. The main attraction here though is the richly integrated sound of the quintet with Jimmy Deuchar’s trumpet and Alan Ganley’s drums on great form throughout. Freddy Logan on bass is no slouch. There’s more of the same on Late Spot At Scott’s. A moody Angel Eyes and an uptempo Yeah! the Horace silver opus, are highlights. Tubby’s tenor and vibes are to the fore and every track is underscored by Ganley’s tasteful drumming. Because of the smooth integration of the quintet and the wild, inventive solo work, these two live discs are in some ways even better than the New York sessions.

Between 1964 and 1967 Tubby recorded two sterling big band albums, Tubbs Tours and 100% Proof. Tours was Tubby’s idea of presenting music from around the world and he covers several countries with atmospheric music for each one, different in mood and presentation. It is a shouting, hard-swinging orchestra with precision playing from the likes of Keith Christie, Ken Wray, Bobby Wellins and Peter King. Terry Shannon is back, briefly, on piano as Tubbs digs into Parisian Thoroughfare on biting tenor and somnambulistic flute on Raga. He even has a bash on tympani on Russian Roulette. The arrangements, the playing generally and the solos by Tubby and Deuchar are all first class on this album. 100% Proof is lighter and less intense and features Tubby’s homages to his favourite US musicians with Sonnymoon For Two, Rollins, Milestones, Miles Davis, Nutty, Monk and Bluesology, Milt Jackson. Oddly there’s nothing of Coltrane, one of Tubby’s main influences. The best track is the title piece, a 14-minute blast off for Hayes on supercharged tenor sax. These two LPs represent some of the finest jazz big band playing anywhere in the 1960s.

Next we come to Mexican Green, arguably Tubby’s best and most innovative LP. With yet another new and this time young rhythm section, Tubby’s quartet was right up to the minute in terms of the way jazz was going in the US. This disc was a departure for Tubby as he moved closer to the free style that was then gathering momentum in jazz. The new rhythm section was with him all the way. They play a modal figure at the start of Dear Johnny B, a tribute to drummer Johnny Butts who had died in a car crash shortly after appearing on 100% Proof. Trenton Place is a gentle ballad where the Coltrane Favorite Things influence can be detected. Second City Steamer is an uptempo romp with Hayes and his drummer Levin in close integration. The major work though is the title track where Tubby begins to embrace the free scene, albeit in his own unique style. This piece is made up of a brief, fast workout of the theme and then Hayes and his drummer set up the solos with each man playing until he reaches a climax and the next player then takes over. During solos though each musician is free to play “anything his mind desires”. It is not so far removed from what Ornette Coleman had been doing for nine years. This is easily Tubby’s most advanced record to date, and it is great, if challenging stuff.

Grits, Beans And Greens: The Lost Fontana Studio Session 1969, is heard here for the first time since it was recorded in 1969. Tubby chose not to pursue his flirtation with free jazz or expand what he had started on Mexican Green, instead returning to high-powered hard bop and blues. He did keep a close integration with drummer Spike Wells this time, and time signatures change frequently. It is top-drawer music though with memorable themes like the title track, Rumpus and For Members Only. Exquisite ballad playing too on You Know I Care. So why did we have to wait 50 years to hear it? Simon Spillett speculates over four large pages and Steve Voce thought the tenor was under-recorded, but it sounds good enough on vinyl to me. Like many Blue Notes of the era it maybe was put on a shelf and in time forgotten; as simple as that. If it could happen to Wayne Shorter and Hank Mobley it could happen to Tubby Hayes.

I’d like to finish on a high, but The Orchestra (LP10) was, I think, a mistake. Tubby plays some melodic solos over a batch of pop songs such as Hey Jude (featuring throbbing bass guitar and heavy rock drumming) and This Guy’s In Love With You while a big orchestra with strings provides syrupy backings. Two tracks even have a woo-woo-hoo soprano voice warbling. You can tell that Tubby’s heart wasn’t in it and whoever advised him to do it, did him no favours. It flopped as well it might and he didn’t even make much money with it. However, the music on the other 10 LPs is so good, with most of them worth more than five stars, that I will not reduce the rating by even a half star. Producer Kevin Long told me it was a labour of love putting out this box set and with expert remastering by Gearbox Records and original artwork on the LP covers it does full justice to Britain’s great tenor sax master, composer and bandleader. Punters will have a lot of serious listening here and some serious reading as Simon Spillett’s comprehensive notes are spread over 24 pages of a large booklet. Simon covers every aspect of Tubby’s recording and work with Fontana in well-researched detail. The only thing missing is what Hayes used to have for breakfast on Saturday mornings, but I feel confident that if pressed Simon could probably answer that one as well. This is a major retrospective release.