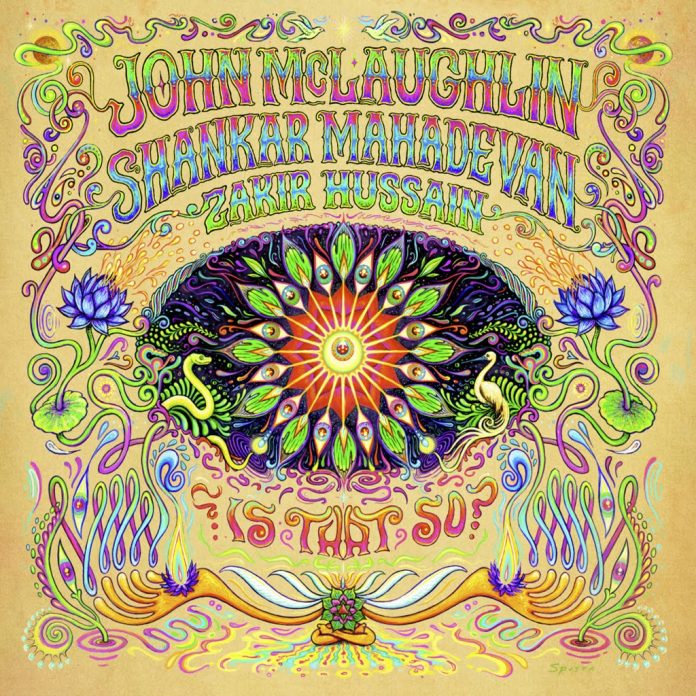 Those who admire John McLaughlin’s guitar mastery will find this release quite surprising – gone are the long solo lines on the strings, and instead there is a powerful, almost orchestral, soundscape on the guitar synthesizer and on guitar effects units. It is principally a vocal album featuring the very beautiful singing of Shankar Mahadevan, underpinned by the percussion of McLaughlin’s longtime collaborator in Eastern music, Zakir Hussain.

The guitarist tells on his own website of the development of his collaboration with Mahadevan, dating back to 2013 when the singer joined a tour by Shakti. McLaughlin’s challenge was to integrate his own background in Western harmonic music with the scalar traditions of North and South India, using the structure of raga. However, he eventually decided “to abandon the rules of the Raga system completely and apply my own western harmonic liberty to the amazing voice of Mahadevan”.

The result is a richly coloured creation, all sung in Hindi, but with English translations of the lyrics supplied in the accompanying booklet. Beautiful sounds, with jazz influence to some degree – but don’t expect the flowing solo guitar work we have enjoyed with Shakti and all other bands led by McLaughlin. As he says in his liner notes, this new release requires listeners to keep an open mind.

PS from Roger Farbey, 27/03/20: A free download of this album is available until the end of April 2020 as an act of solidarity during this global health emergency. Abstract Logix tweeted: “In view of the current situation world wide with Corona Virus and the fact that we are obliged to spend more time at home, we would like to offer our friends the free download of the new album ‘Is That So’? until end of April 2020 from Abstract Logix”.