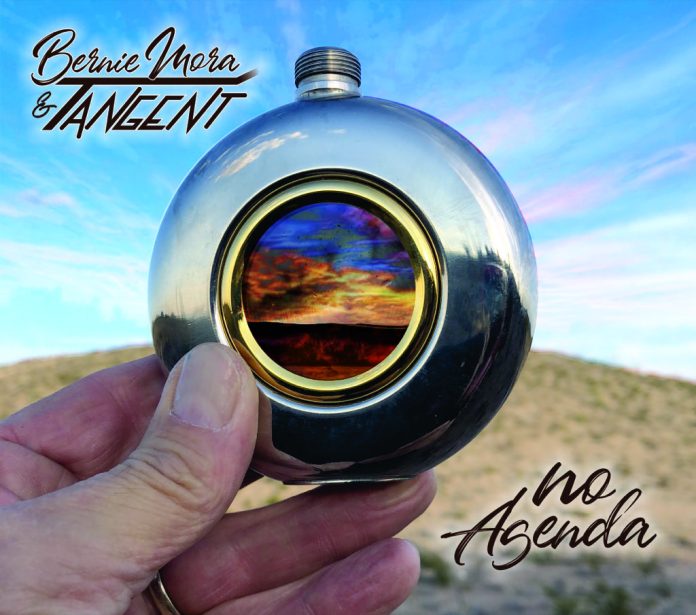 No Agenda follows in the wake of Bernie Mora & Tangent’s previous release Transformation (Rhombus Records, 2016) and its predecessor Dandelion (Rhombus Records, 2013). But whilst Mora may not be one of the most universally known jazz guitarists, his records certainly pack a punch when necessary. Overall, Tangent in full swing inhabits the more robust end of the jazz-rock spectrum. Numbers like the deceptively innocent sounding Cup A Joe are given a full-on treatment with Mora almost sounding like Sonny Sharrock on the opening guitar bars.

There’s also funk a-plenty with tracks such as the appropriately-titled Pale Moon Funk and Commando Roll evoking the dizzying heights of The Brecker Brothers in their prime, courtesy of a muscular brass section. Another energetic outing is Doc The Clock which is dedicated to Tangent’s late drummer Doc Anthony and such was the respect the band had for him that they used his drum kit for the recording. However, there is some breathing space too in the form of the more reflective Take Me Away (Reprise) and the curious It’s A Honu World which sports some Hawaiian chanting from Leilani Rivera Low.

One unusual aspect of the album and one that offers a different viewpoint from the ubiquitous shredding, is the arrangement of the title track where a repeated trumpet cadenza appears, eerily channelling David Mason’s piccolo trumpet solo on The Beatles’ Penny Lane. Mora is an impressive electric guitarist who can effectively wring the very last notes out of his axe at top speed but can, on occasion, also display a near-Hendrixian sensibility.

Click here for information on how to buy Bernie Mora & Tangent: No Agenda

Nigel Jarrett - 19 April 2020
The provenance of at least one track on Roscoe Mitchell's new album says something about the eternal struggle of the new in music to find listeners willing to meet...