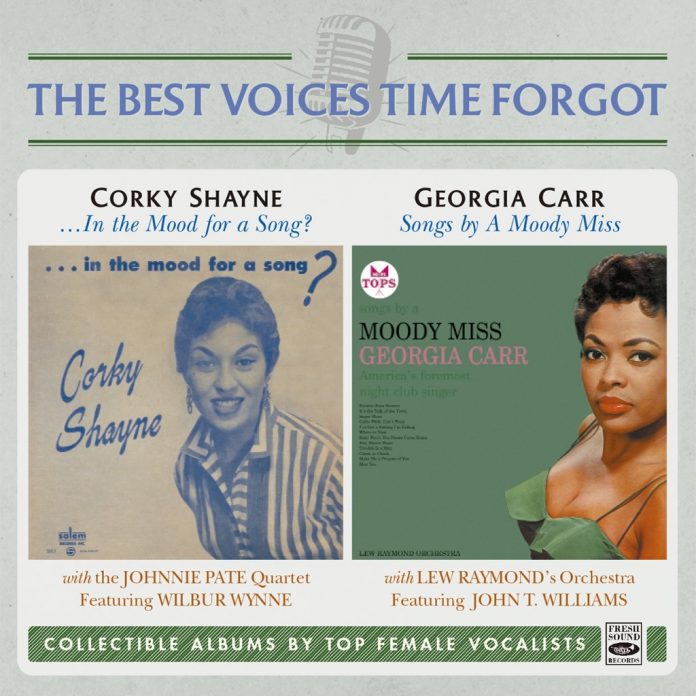 This package takes in Shayne’s one and only album, which she cut at the age of 24 in 1956 with the backing of the Johnnie Pate Quartet, and which overall is good enough to yet again raise the question of why so many “one shots” are what they are.

While she has little in the way of a jazz sensibility, Shayne, thanks to a trajectory which at that point in her career had taken in high-school dance bands, appearances in whatever talent shows would have her, and various supper clubs around Chicago, knew how to approach a lyric, and was more than passingly appreciative of the demands a lyric can make. Thus, the trifling Two Sleepy People is given a healthy dose of poignancy, while the not underdone Autumn In New York becomes a pretty convincing paean to both season and place.

Georgia Carr was lacking in the jazz sensibility department too, but too many decades have passed to split hairs as far as yer actual jazz hack’s concerned. From 1946 to 1952 she sang at Club Royal in San Diego, and such an engagement summarises her vocal abilities, which are as marked by the demands of musical theatre as they are any other genre. This is best exemplified by her rendition of It’s The Talk Of The Town, where her blowsy vocal is cushioned by discreet filigrees from Sims and Tedesco.

Things also fall together nicely on Where To Now, which brings out a slightly strident quality in Carr’s voice, and the backing goes about its business with more taste than a stick can realistically be waved at.

Click here for information on how to buy Corky Shayne: …In The Mood For A Song? / Georgia Carr: Songs By A Moody Miss