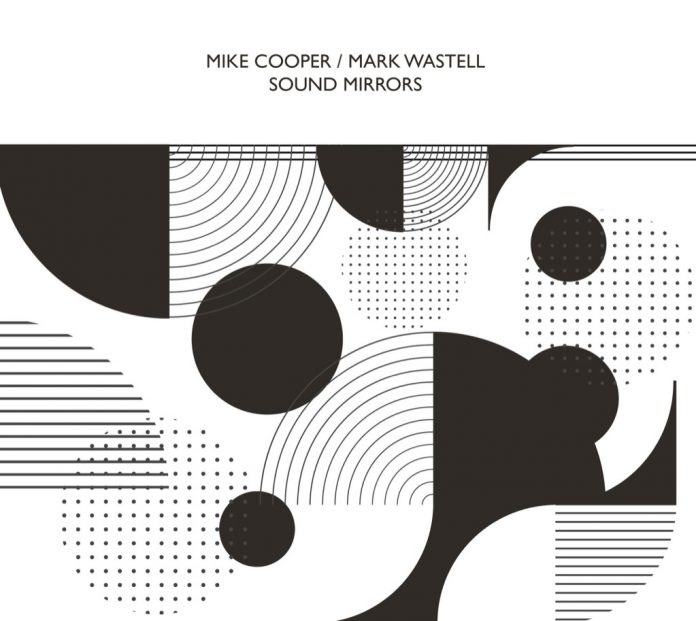 Mike Cooper has been around since the 60s, when he was prominent as an acoustic folk/blues guitarist who was associated with members of the jazz world. For some time he has operated in the area of free improvisation, stretching the boundaries of guitar playing and extending it to incorporate electronic devices, gadgets and associated techniques. Many may recall his involvement in The Recedents, with Lol Coxhill and Roger Turner.

On this album he is partnered by Mark Wastell, another player immersed in the area of free music, this time using a Paiste tam tam (gong), percussion and a shruti box – a hand-played type of small harmonium which produces a drone effect.

The music here has been inspired by the sound produced by acoustic sound mirrors, large reflectors such as those constructed near Dungeness in the 1920s and 30s, to detect the noise of aircraft over the English Channel. Consequently much of the playing involves the use of electronics.

It starts atmospherically with a backdrop created by gong and drone above which is a mixture of bowed and plucked strings, bent and distorted, with occasional purity of tone coming through, plus slide guitar, for which Cooper is well-known. The electronic influence is more apparent on Fan Bay, where a high-pitched frequency is emitted and fluctuates in conjunction with Cooper’s guitar. At times it is reminiscent of a Ry Cooder soundtrack, especially when the electronic signals subside and the guitar has precedence, but with greater abstraction.

The use of sustained electronic notes, with occasional oscillation and feedback, can be grating and intrusive (and not for those susceptible to tinnitus!), but for creating a mesmeric effect, the insistent strumming on Joss Gap was more convincing, gradually building up speed towards an impending inevitability – a sudden halt then calmly entering a different sphere; one where the slide threatens to take melodic shape but with dark undertones – shades of Blind Willie Johnson.

Percussion, castanets and rattles lead into further explorations in the slide area on Maghtab, skidding over the frets, whilst Boulby’s ominous depth has you looking over your shoulder. It’s a mixed bag – occasional moods of calm and serenity alternating with twitchy paranoia. A parallel with the early-warning installations? Quite possibly, though some might say a reflection of life. Recommended to those who take an interest in the tradition of John Fahey and guitar experimentation.