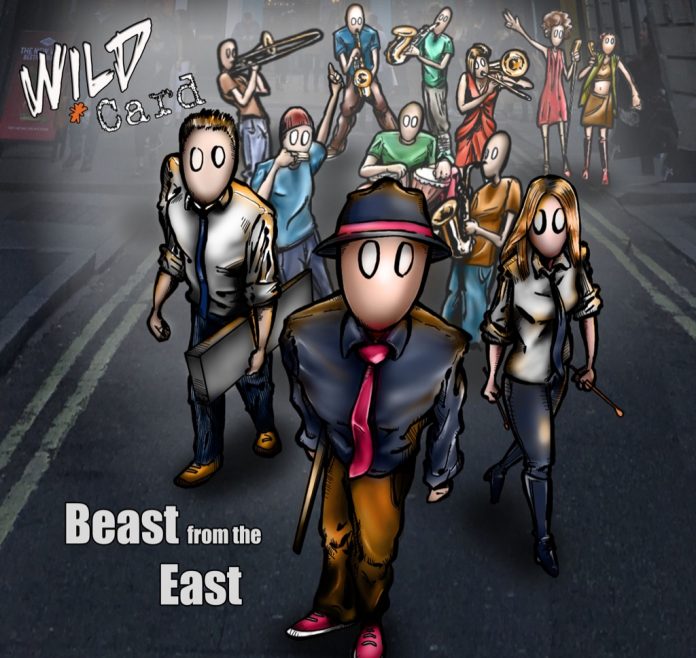 The core members of Wild Card are French guitarist and band leader Clement Regert, Hammond organist Andrew Noble and drummer Sophie Alloway. Their modus operandi is to invite a variety of musicians to perform and record with them. Currently, the excellent Graeme Flowers is a constant guest. He plays trumpet on all tracks of Beast From The East and 12 other top-tier musicians contribute throughout in varying degrees.

This is the band’s fifth album and it’s a heady mix of hard bop, rock, ska, samba and funk. All songs bar two were written and arranged by Regert. When the album was recorded, the musicians were in the studio at the same time and because the tracks were first or second takes, it’s close to a live performance. I witnessed the band’s powerhouse delivery first hand four months ago at Scarborough Jazz Festival and it raised the roof.

Every number on this high-energy album has something different to offer. Highlights are many and include the title track with Flowers on trumpet, Tim Garland’s tenor sax and Barnaby Dickinson’s trombone combining to create an escalating tension that’s ultimately topped by a soaring rock riff from Regert and a triumphant finish. Tales From Hanoi has a pulsating samba rhythm, brilliant trumpet soloing, buoyant organ from Noble and mesmeric percussion from Alloway and Joao Caetano. Black Tower, in memory of Grenfell, is poignant but rhythmic with stirring guitar from Regert and impassioned sax soloing from Denys Baptiste. Do It Like A Girl has a smashing melody with Adam Glasser’s harmonica recalling the tone of Toots Thielemans in Midnight Cowboy. The closing track, Papa Was A Rolling Stone, has a driving counter beat from Noble with Will Fry on percussion and sizzling trombone from Alistair White.

This is a vibrant, exhilarating collection of songs featuring superb collaborations with a bevy of ace players. It’s high octane, good-time music at its best.

Click here to buy Wild Card: Beast From The East

Nic Jones - 04 August 2021
Clichés might abound, but I'll do my utmost to dodge them because the likes of Mr Coxhill deserve words not constructed in such ways. Thus the cliché about not...