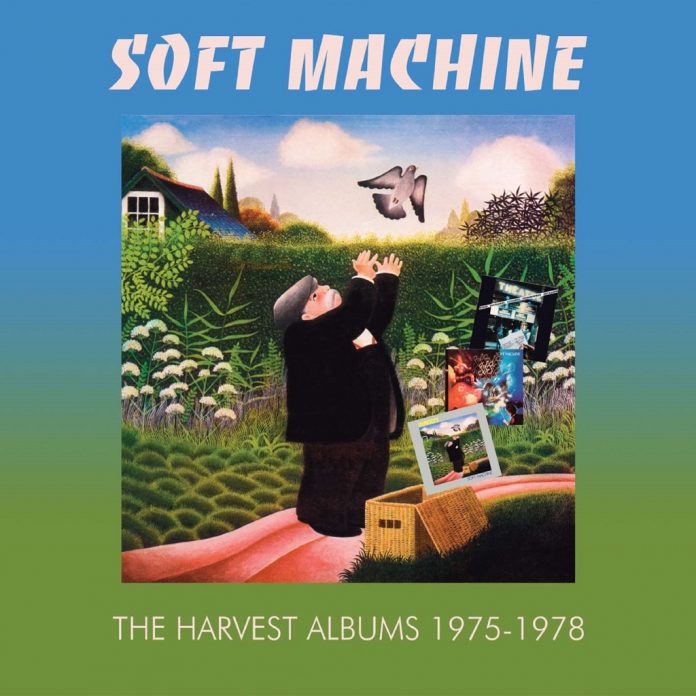 The numerous reincarnations of Soft Machine mean that even though they released a new album almost every year from their inception in 1968, very rarely are two line-ups the same. The three albums in this set represent the closing years of Soft Machine as a studio band, and the end of founding member Mike Ratledge’s tenure. In fact, after Softs, the band only released one studio album, 1981’s Land Of Cockayne, until 2018. Starting with Bundles, released in 1975, the collection moves on to Softs and Alive And Well Recorded In Paris.

Drummer and percussionist John Marshall replaced Robert Wyatt, who left the band in 1971, and is featured on all of the three albums, as is legendary keyboardist Karl Jenkins, who also plays various reed instruments on Bundles and Softs. Most notably, guitarist Allan Holdsworth makes a one-time appearance on Bundles, bringing virtuosic musicianship and adding a distinct jazz-fusion twist to Soft Machine’s established prog-rock style.

Bundles begins with the five separate parts of Hazard Profile, and Holdsworth’s overdriven tone lifts the melodies and riffs, adding a great energy to the ensemble. As early as the first track, Hazard Profile Part One, his mind-bending improvisation blasts over the groove of Roy Babbington’s bass and John Marshall’s furious drums. The title track, Bundles, utilised some excellent, winding unison between guitar and bass, with a dissonant riff supporting by swelling organ and keyboard. The track goes straight into Land Of The Bag Snake, which is largely a drawn-out jam, the band vamping over a few chords as a vehicle for Holdsworth’s improvisation. The Man Who Waved At Trains provides an interesting change of pace, with a more jazz-style composition, and Jenkins leading the melody on soprano saxophone, before the band accelerate into the next track, Peff.

Softs was released in 1976, introducing Alan Wakeman on saxophones and John Etheridge replacing Holdsworth on guitar, and the change is immediately noticeable with the opening track, Aubade, an acoustic duet between Wakeman and Etheridge. As the album continues, however, the stripped back, folkesque influences on the first few tracks fade away, and are replaced with the layered and complex synth-based compositions that Soft Machine are known for. There is a distinct funk/fusion/rock flavour to Softs, particularly noticeable on Ban-Ban Caliban, Nexus and the penultimate track, One Over The Eight, with those last two taking on a Mahavishnu Orchestra style approach, including crescendos from drums and piano accompanied by wailing lead guitar.

The third and final album, Alive And Well Recorded In Paris, comprises recordings from four nights at the Theatre Le Palace Montmartre in 1977. While live, some of the tracks were subsequently heavily edited, with parts rerecorded and mixed in Advision Studios, London. I’ve always been somewhat sceptical of live albums that are tampered with after the fact, but the sound is absolutely superb. The natural reverb of the venue lifts each track enormously, as the true volume and energy of the band are captured. All tracks bar two were written by Karl Jenkins, with Number Three written by John Etheridge, and Surrounding Silence by Rick Sanders, whose violin replaces the saxophones that led much of the melodic content on the previous albums. Highlights on the album include Odds Bullets and Blades (Part 1) and Huffin’, which best demonstrate the sonic depth of the band, as well as the musical ability of its members.

As a set, the three albums provide a fantastic look into the late stages of Soft Machine, showing their refined skills as one of the UK’s best and most well-known prog bands. The albums themselves are of a very high standard, with a mixture of the band’s more established members, as well as newcomers bringing different approaches to the music. With the remastering, the result is an interesting, captivating and all-round excellent experience.

Roger Farbey - 04 August 2021
The last 12 months have been an extremely busy time for Barbara Thompson. Her brilliant and highly readable autobiography Journey To A Destination Unknown was published in 2020 by...