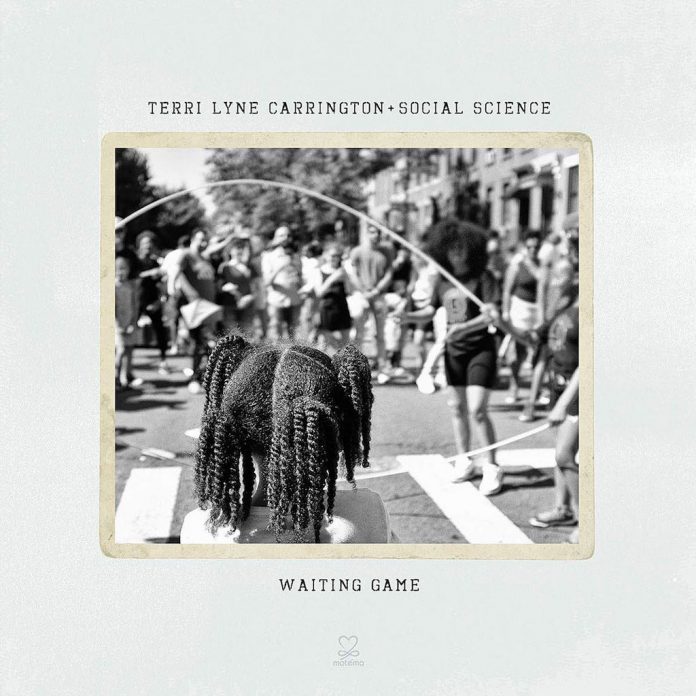 Drummer Terri Lyne Carrington has always been concerned about the society she lives in but has rarely expressed her political views in her music. “But everything has been pointing in this direction”, she writes. “At some point you have to figure out your purpose in life. There are a lot of drummers deemed ‘great.’ For me, that’s not as important as the legacy one leaves behind”.

That legacy will now be shaped by this ambitious double-CD set, its core Social Science group built around the friendship and collaboration of Carrington, pianist Aaron Parks, guitarist Matthew Stevens, instrumentalist Morgan Guerin, and vocalists Kassa Overall and Debo Ray. To them is added a long list of impressive guest rappers, speakers, and instrumentalists, notably bassist Esperanza Spalding and trumpeter Nicholas Payton. The first CD – Waiting Game – is largely vocal, the songs dealing with such current issues as the Black Lives Matter movement, police brutality, homophobia and gender equality. The second CD consists of the four-part Dreams and Desperate Measures, an improvised instrumental suite for quartet.

Politics and jazz have long overlapped, but the best meetings have been those where the politics are implied rather than stated: John Coltrane’s heart-wrenching Alabama, for example, or Charlie Mingus’s pointed Fables Of Faubus. Carrington’s approach is more direct, the vocals explicit and often angry in their statements and demands. But such vocals are inevitably of their popular style and time, and rarely age well. The instrumental support, however, is more nuanced, and thus much more effective, notably the understated guitar solo on Over And Sons by Stevens, the main themes melodically interesting enough to support both lyrics and instrumental solos and form a basis for improvisation.

In contrast, the four-part improvised Dreams suite is much more adventurous, its implicit musing on personal and musical freedom and its pointillist delivery making it a consistently engaging listen. So different it is from the vocal first set that it could and should be considered as a stand-alone release, a fine example of improvised music making by four fine musicians. So, a political game of two halves. Cast your vote now.

Steve Voce - 08 January 2020
This well-crammed set (two hours, 36 minutes) has 28 titles by the quintet, and for anyone who doesn’t have them already, it really does make a mandatory buy. It...