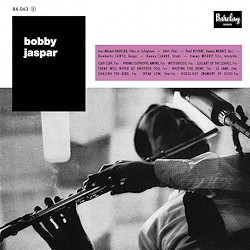 This is a real gem for anybody who loves straightahead early bop. Bobby Jasper was one of the many great talents in the music who left us far too early and before their full potential could be competed. He was, it is often considered, one of a small handful of master jazz improvisers from Europe, including the UK, who were major soloists comparable to their American counterparts. Tubby Hayes and Vic Feldman would be two others.

This delightful set of 10 bop selections was made in Paris in 1958 with a sterling crew including the very impressive Michel Hausser on vibes and xylophone, Jimmy Merrit (sic) – late of the Jazz Messengers of the day – and Kenny Clarke, the man who is credited with inventing modern drumming.

Although at the time Jasper had only recently mastered the flute he chose to play it exclusively on this release and he does so, sounding as though he played it all his professional life. The music is relaxed for the most part, with medium-up selections side by side with a couple of slow songs and Monk’s Mysterioso (sic). The Monk is played with a fresh arrangement introduced by the bongo player and a loud gong crash from Clarke followed by some of the most laidback echoing phrases between flute and vibes. Jasper begins playing the tricky Monk theme with ease as Hauser echoes his lines all the way down until both musicians add their individual solos.

Le Jamf offers some of the most soulful flute ever heard in jazz, the melancholy cast only making it all the more moving. On Chasing The Bird, Jasper runs down Parker’s blues and produces a strong solo as Hauser comes in on xylophone, an instrument that sounds like vibes but without vibrato and warmth. It makes an interesting comparison with the other solos on vibes though.

Bass is strong throughout although the players are not listed individually on tracks and Clarke’s drumming is as subtle and propulsive as anybody could wish for, all the way through. Note how often he shades down the volume to almost a whisper and continues to play with crisp swing particularly behind the bass solos. The music swings at all times and at all tempi and although it breaks no new ground it offers a comprehensive re-run of classic bop with more than a few personal touches.

Made in Paris by Sam Records the record has an added bonus in being the first issue using the original stereo master tapes. The all analogue manufacture gives us a clean, bright recording and the jacket is an exact replica of the first release in 1958. These lovingly mastered LPs are not cheap but such is the quality of the music and packaging that they are worth whatever you are asked to pay for them.