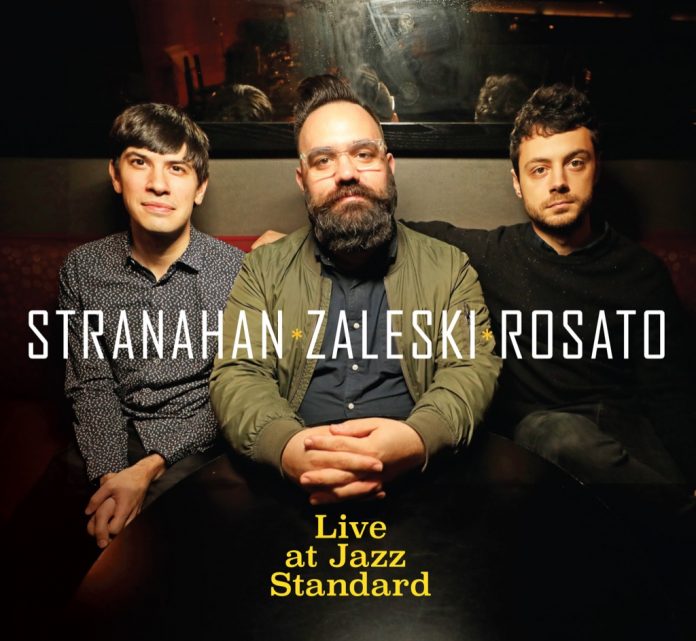 Drummer Colin Stranahan urged the piano trio here to record a first album (Anticipation, 2010) after they’d come together while pursuing separate careers as sidemen. Stranahan had performed with Kurt Rosenwinkel, Zaleski with Ravi Coltrane, and Rosato with Gilad Hekselman. The second album (Limitless, 2013) was again a studio recording.

The latest was recorded live at New York’s Jazz Standard and is devoted mainly to pianist Zaleski’s compositions, the opening Forecast being reprised from the second and given a longer outing. It begins with Stranahan and Rosato feverishly playing across each other, followed by a chatty piano episode and one where the pianist’s left hand briefly asserts itself against the vanguard right, then a drum solo that’s an extension of what went before, not just a perfunctory add-on.

This indicates how much the three invest in prominent detail, like Rick Rosato’s heartbeat bass on the reflective Sullivan Place – an ever-more-active cityscape – or Zaleski’s evasive, Garner-like intro to All The Things You Are, and then his stirring of the narrative alongside drums and bass with powerful rhythmic allusions to the changes. That Stranahan’s solo maybe outstays its welcome is one of the few reasons for admitting that it wasn’t a flawless gig.

The way Zaleski works up Waltz For MD with impeccable taste and touch and marvellous pianism also provides an example of how Rosato’s late solo and Stranahan’s final flourishes are acts of deference on an occasion that calls for them. Identifying such occasions is partly what trio equilibrium is about.