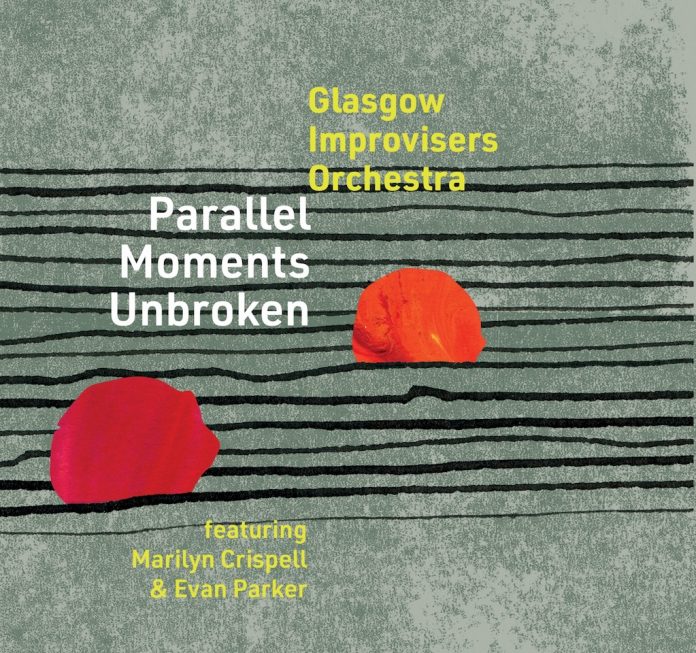 The large improvising ensemble always has the potential to stake out some unfamiliar territory, depending of course on how the passing moments are marked. On this occasion the GIO is a force in which restraint wins out over primal screaming, and the pervasiveness of the quality ensures Raymond MacDonald’s music is never less than intriguing.

Given the music’s democratic nature I can’t help feeling that the notion of the guest soloist is a little incongruous, but that thought’s cancelled out by both Crispell’s and Parker’s contributions, with the latter in particular demonstrating how for all of his technical mastery of the saxophone he’s still one of the most skilled listeners and accomodationists on the planet.

Meanwhile, on both Parallel Moments and Parallel Songs on the first disc Crispell commits to posterity some of her most compelling work since her days as a member of Anthony Braxton’s quartet, at least for me, before the latter piece takes in a nuanced blow-out of the type which is almost a default setting for some sizeable groups.

In his notes on his writing process for this programme Raymond MacDonald refers to an assembly of graphic scores, through-composed sections, photographs and artwork as the means for bringing the music to life. I would argue that the means by which the end is achieved is to some degree irrelevant, particularly when the realisation makes for such rewarding listening, as on Parallel Signs (b) on the second disc, where for a fleeting moment Parker evokes the spirit of the late Lou Gare, and the overall light and shade of the programme, together with the colours evoked, makes for something that repeatedly (and positively) makes these ears prick up.

Bruce Crowther - 04 January 2021
Noted as a free-jazz and improvising pianist, Angelica Sanchez is here joined by fellow pianist and mentor Marilyn Crispell. Working with minimalist preparation, in some cases simply an idea,...