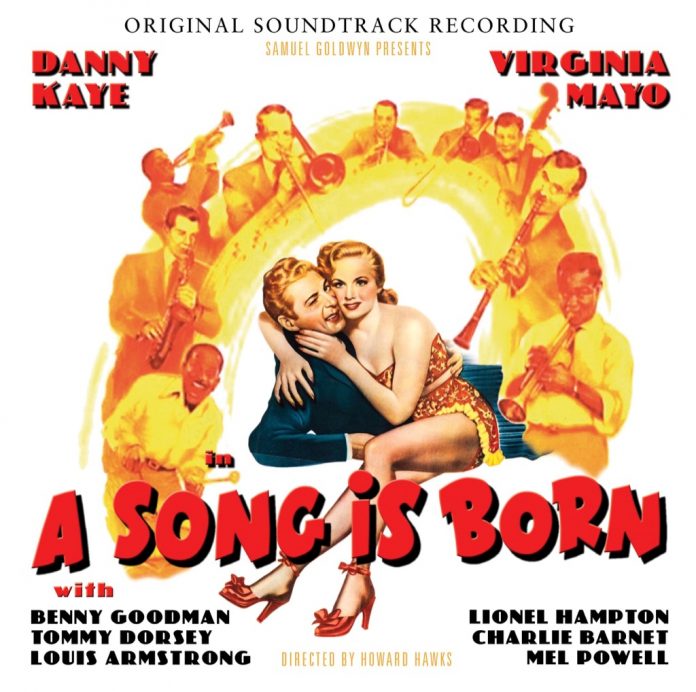 Premiered in New York In October 1948, A Song Is Born was greeted with only moderate acclaim despite technicolor, production costs of nearly three million dollars, and direction by Howard Hawks.

A lightweight musical “romcom” (in today’s parlance), the wacky Hollywood plot starred the popular Danny Kaye. He played an earnest musical professor, writing a book on the history of music, who ventures out of his academy into the big bad world to learn about swing, jive, blues, boogie-woogie, Dixieland and pop. He encounters and invites back some top practitioners of the day, who can be seen and heard in the film – predominantly Benny Goodman, Louis Armstrong, Charlie Barnet, Tommy Dorsey, Lionel Hampton and Mel Powell.

The jam session version of the title song is a patchwork of musical styles including the Brazilians (samba percussion), the excellent Golden Gate vocal group, and solos from the main stars plus vocals from Louis and Jeri Sullivan. All the soundtrack music (the first 11 titles) were prerecorded in 1947. As gleefully reported in Billboard magazine (23 August 1947) a fist fight occurred during the lengthy overnight recording session when an exasperated Tommy Dorsey attacked Goodman. It was all smoothed over, and undeterred Benny took on an acting role in the film as a Professor Magenbruch complete with dyed black hair and a moustache. Ah, those were the days…

The soundtrack takes are all sourced from the original Goldwyn Studios acetates and include some very good music, well worth reissuing. Louis stretches out exuberantly in Goldwyn Stomp, A Song Was Born and Flying Home, all with Lionel Hampton. Benny swings tightly with Mel Powell at the piano in Stealin’ Apples. (Powell is allocated, rather oddly, a Dixieland role with Muskrat Ramble). Dorsey, Barnet and Hampton showcase briefly with representative pieces, and Anitra’s Boogie and Daddy-O are well performed by less stellar artists. A selection of associated cover recordings follow, clearly classified under helpful sub-headings in the commendably detailed booklet notes.

The sentimental and derivative title song wears a bit thin by the final fifth version, but this apart there’s much of musical merit and interest to enjoy, including Goodman’s experimental tilt at bop, and three tracks from Armstrong’s newly formed All Stars. An enjoyable and well-planned release.

Matthew Wright - 07 April 2021
Bass players often take a back seat – some assert themselves, playing a pivotal role; others assume a supporting capacity. Some are leaders; others suffice with regular or occasional...