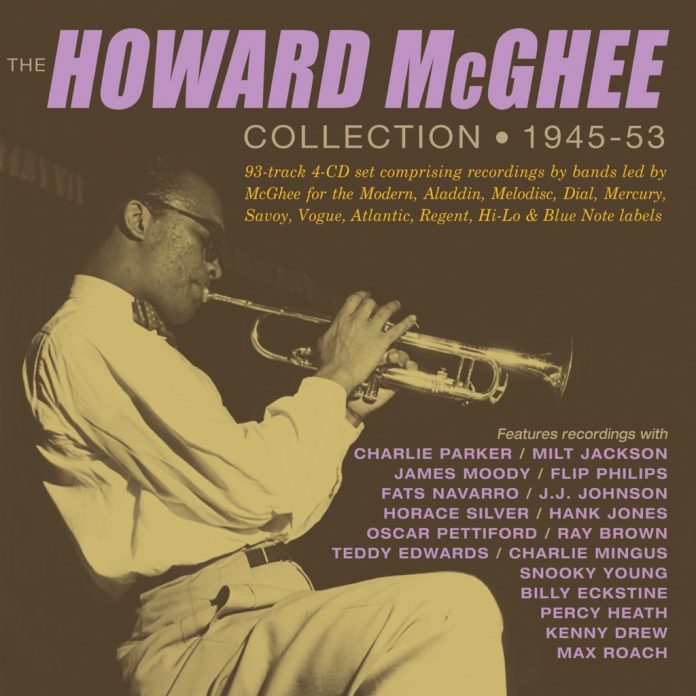 Howard McGhee had an intense musical life throughout the years covered by the title and, whilst most of the tracks under his own name are here, there is a dimension missing in that the myriad of tracks that he made under Charlie Parker’s name are by definition not here. For that reason the things with Andy Kirk and Charlie Barnet aren’t here.

The good news, whether or not you are familiar with his playing, is that this is a wonderful collection by one of the first and most important of the bop trumpeters. In Dizzy’s shadow in every respect, Howard was still a magical player with fresh ideas of his own, and standing out in those early days above everyone else except Fats Navarro. It was only at the tail of the years covered here that Clifford Brown emerged to burn more brightly than anyone. The period here ends on a high with 10 tracks by the oddly-named Korean All Stars, who include Gigi Gryce, Horace Silver, Tal Farlow and Percy Heath. After that McGhee disappeared almost completely for more than two years, confirmed by his next album being dubbed The Return Of…

The 25 tracks on the first disc were all done in Hollywood, where Maggie had travelled with Coleman Hawkins in 1945. He stayed there until 1947, and was never short of work (you can hear him elsewhere in many concerts with JATP alongside Willie Smith, Parker, Gillespie, Lester Young and Mel Powell among the assembled giants).

Here he lays down an early marker in the stratosphere with the 1945 Mop Mop and at the same session creates a business-like but accomplished Stardust, with backing from Teddy Edwards, in those days very much a Hawk disciple. Thermodynamics and Trumpet At Tempo were impressive trumpet showcases fashioned after Bird had left the studio at the notorious Loverman session. Bird flies briefly on the aforementioned Be-Bop and if you didn’t know, you’d think all was well. McGhee climbs high and stays there, highly inspired by the alto. Somebody wins, somebody loses…

The trumpeter enjoys himself playing great obbligato behind the Dinah-like blues singer Pearl Traylor and Estelle Edison on five remarkably similar blues tracks, where Edwards has already shed his Hawk mantle. These were obviously aimed at the R&B market.

The second disc brings on the great keyboardists. Dodo Marmarosa graces the first three track where Maggie shows a new maturity and Teddy Edwards has adjusted to being a Bird follower with just a touch of Hawk’s vibrato. Dodo’s playing is lucid and delicate and, on Up In Dodo’s Room, both mellow and percussive. He flies from the opening of High Wind In Hollywood. McGhee’s solo is both pyrotechnic and intense.

Nothing then for a year until three loosely swinging tracks by the Flip Phillips/Howard McGhee Boptet. Howard’s Dizzy-styled work sits well with the tenor, and Hank Jones shows that he was as good in his early years as he was in his later prime. He’s back for the next for tracks which have Billy Eckstine wielding is valve trombone. It would have been of benefit if he could also have replaced the scat singer, but it’s fascinating to hear his aggressive trombone. He hits somewhere between Benny Green and Jay Jay. McGhee is near his best on these tracks with another well-dispatched ballad, The Man I Love. Hank stays for the rest of the CD with cohorts Milt Jackson and James Moody. Jackson of course solos with more vigour than in MJQ days and Hank is unusually direct.

Moody solos well and all combine to produce a good sextet sound on their 17 tracks that spill over onto CD3 with Jimmy Heath playing powerful baritone supported by a good pianist called Will Davis. McGhee and Jackson continue to strike sparks off each other. The two-part How High The Moon has ultra-powerful McGhee, but the 78 seems to have been worn. The hackneyed melody sounds very tired by the abrupt end of the second side. There are four tracks by the Howard McGhee/Fats Navarro where Milt and McGhee double on piano and the two trumpets sound unexpectedly relaxed in each other’s company. Ernie Henry’s alto is better than expected, too. Attractive use is made of two-trumpet voicing on the two-part Double Talk and while the temperature goes up no blood is spilt. Six tracks by the McGhee All Stars bring on Jay Jay, great piano from Kenny Drew (featured on I’ll Remember April) and a delightfully on-form Brew Moore on tenor.

On CD4 they race through a Dixieland medley in three minutes. Jay Jay is succinct on a fast Rifftide. Next are 11 tracks by the oddly-named Korean All Stars. They open with another two-part How High The Moon, rather better than the first one. An unexpected One O’Clock Jump opens with a fine solo from guitarist Skeeter Best and Pettiford does some nice swing riding. The obviously touring band hews to the swing thing with a scrambled Stompin’ At The Savoy. Order is restored with the final half dozen tracks that have good flute and alto from Gigi Gryce, infallible Tal Farlow and some measured and warm horn from McGhee, notably on his own ballad, Tranquility. Track 93 is, appropriately, Gordon Jenkins’s Goodbye with fluid and gentle horn from the leader.

The set has a very high level of improvisation throughout, nicely presented and minimally affected by the recording limitations of the time.

John White - 09 March 2019
This set from Beat Goes On combines two splendid sessions. On both, the band (with some small changes of personnel) shouts, roars and plays softly, seemingly without effort. Monday Night...