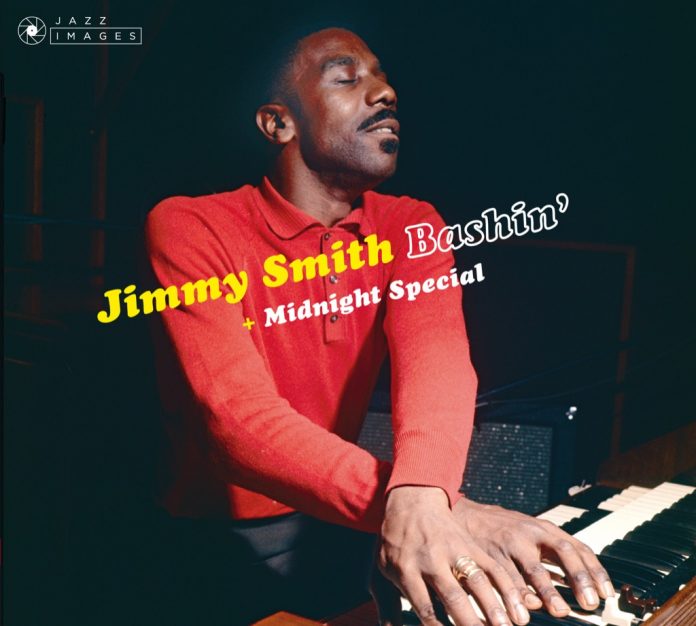 This Jimmy Smith compilation CD is a little confusing. Whilst purporting to be a reissue of two albums – Bashin’ and Midnight Special, it really is four albums as Jimmy Smith Plays Fats Waller and Crazy! Baby are also added as bonus albums. The album title Bashin’ has also been abbreviated from the original, which was titled Bashin’ – The Unpredictable Jimmy Smith when first issued. So with 26 tracks and a playing time of over two and a half hours, this is a pretty good release if Jimmy Smith is your thing. He is certainly mine.

James Oscar Smith was born in December 1928 (although there is some confusion as to whether it was in fact 1925) in Norristown Pennsylvania. No musician and certainly no organist is more closely identified with the Hammond B-3 organ than Smith. He single-handedly changed the perception of the organ from an accompanying and background instrument to a lead jazz, blues and R&B instrument; and the way he did that was to copy his solos from horn players and not other keyboard players.

Smith’s new sound required him to play horn-like lines inspired by the likes of Coleman Hawkins, Don Byas and Arnett Cobb. He did, however, concede to being influenced by some keyboard players such as Bud Powell, Art Tatum and Erroll Garner. In turn, Smith has influenced countless generations of other Hammond organ players in many genres of music including soul, rock and funk. To say his star shone bright in the music world is an understatement. In 2005 Smith was given the Jazz Masters Award from the National Endowment for the Arts in the USA; the highest honour that a jazz artist can receive in America.

Smith’s upbringing was not untypical for the time. He began performing in clubs with his father from the age of six and taught himself piano by the age of nine. After serving in the US Navy he went to music college and started exploring the Hammond organ in the early 1950s, switching to organ full-time after hearing Wild Bill Davis. He was quickly snapped up by Blue Note, recording numerous albums for them before signing to Verve in 1962. Midnight Special, Crazy! Baby and Jimmy Smith Plays Fats Waller are from those Blue Note sessions, whereas Bashin’ was a Verve release.

Smith died in 2005 and left a vast repertoire. The reasoning for the compilation of these particular four albums is not altogether clear, but the CD includes a good booklet including most of the original sleeve notes. If you are new to Jimmy Smith or fancy checking out how good the Hammond B-3 can sound, then this is a good starting point. If you are a collector of Smith’s albums then there is a good chance you may already have some of what is included in this compilation. I have a few Jimmy Smith albums in my collection already, but I would still regard this as a worthwhile addition.

Gordon Jack - 30 May 2019
This is a surprising and very welcome reprise of the 1974 collaboration between Astor Piazzolla (one of the greatest composer-performers of the late 20th century) and jazz giant Gerry...